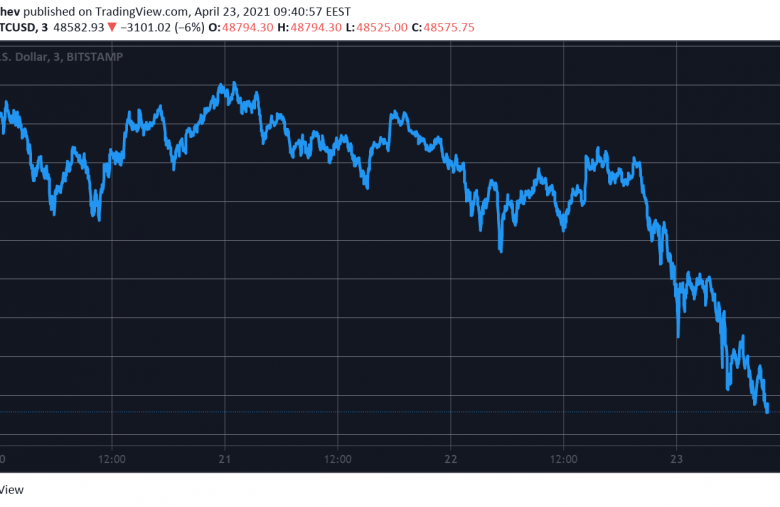 Bitcoin’s suffering has only intensified in the past 24 hours with a massive 10% dump to well below $50,000. The alternative coins have it even worse with substantial double-digit price slumps, and the market cap lost roughly $300 billion in a day.

It was less than ten days ago when everything seemed to be going in BTC’s way as the primary cryptocurrency had just painted its latest ATH record of $65,000. However, the ever-volatile crypto markets turned the tides, and the asset started to lose momentum.

This led to Sunday’s vigorous market crash in which bitcoin plummeted by $9,000 in hours. After a few days of trying to regain some of the losses, the situation worsened in the past 24 hours.

Reports emerged that US President Joe Biden is contemplating a hefty new capital gains tax. Whether that’s the main reason or not is still unclear, but the crypto market initiated another significant price drop.

BTC went from a daily high of over $55,000 to an intraday low of $48,500 (on Bitstamp). This became bitcoin’s lowest price tag since early March. Moreover, the cryptocurrency’s market capitalization slumped to well below the coveted $1 trillion tag.

On the positive side for BTC, its market dominance has jumped to 51.6%, as most altcoins have suffered even more.

An Ocean of Red Among the Altcoins

As mentioned above, the enhanced volatility didn’t pass by the altcoins. Ethereum, which skyrocketed to a new all-time high less than 24 hours ago at over $2,600, has lost more than $400 and is down below $2,200.

Even Dogecoin, which took the Sunday market crash rather well, is down by more than 30% to $0.20.

Ultimately, the cumulative market capitalization dropped by about $300 billion in a day to below $1.8 trillion. On a weekly scale, the market cap has lost $500 billion.