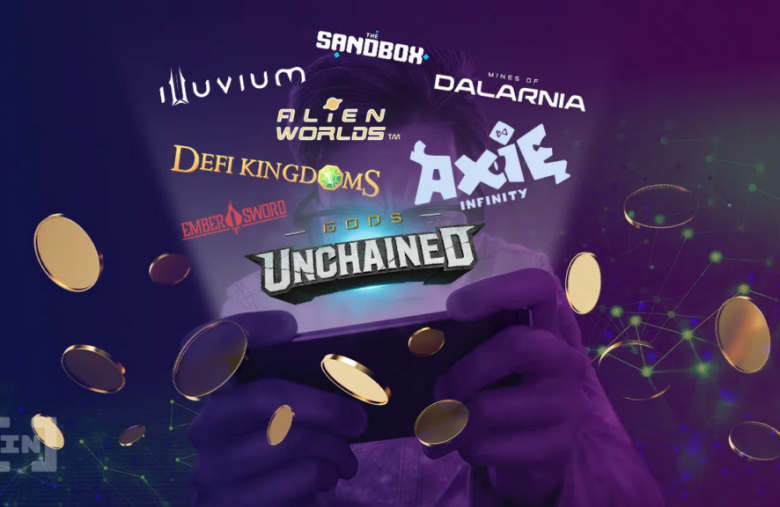 NFT gaming has continued to grow in popularity, and in response to this, gaming guilds are emerging to help players get into the P2E space. Here are 5 NFT and play-to-earn gaming guilds to look out for in 2022.

Non-fungible tokens, or NFTs, are blockchain-based bits of code that may be connected to real-world assets like art or money. NFTs can also be used to determine genuine asset ownership, such as in NFT collections.

Finding rare items, accumulating limited trinkets, and unlocking unusual art and mementos to own and treasure should be a no-brainer for the world’s 3 billion players. Many others, on the other hand, are still skeptical of NFTs. They can be difficult to use, and many newbies are still learning how to do so.

It’s also hard to overlook the volatile nature of NFTs, as well as the environmental ramifications of their current use. Loot boxes, which were paid-for random boxes of items that drained money from consumers, are still a specter that haunts gamers.

However, NFT gaming is one of the most important new NFT developments in 2022, and it will be difficult for developers and publishers to ignore it. As more large publishers support or investigate the usage of NFTs, many of us will probably be using them shortly.

So, what can we anticipate from NFT gaming in the future? Well, play-to-earn gaming guilds are starting to grow in popularity.

Play-to-earn gaming guilds are organizations that aim to make it possible for gamers to take part in NFT gaming. They work by fostering a community of gamers and investors who can support these players.

Investors usually support players by renting out NFTs through scholarship programs. Rather than small-scale sponsorships or management organizations, P2E guilds go a step further by building a community with a range of play-to-earn options.

So, let’s have a look at some interesting NFT gaming guilds for play-to-earn games.

UniX Gaming is a P2E gaming guild and hub that also provides scholarships, training, and educational materials to NFT gamers in their community. The platform has a community that includes over 200,000 members and 20 eSports teams.

The guild offers full scholarships to community gamers with the most potential when it comes to P2E gaming. These scholarships enable players to borrow NFT assets they need to engage in play-to-earn games like Axie Infinity. In return for lending out NFT gaming assets, the guild receives a cut of the earnings from the scholar, usually with a 50/50 split.

UniX Gaming is also developing an IGO (Initial Game Offering) launchpad where game developers can crowdfund their projects, with funds coming from its community members. In return for investing in an IGO, these community members will receive in-game NFT assets.

The gaming guild also partnered with The Sandbox, a P2E game with NFT assets that include virtual land and characters. This partnership was made to buy up land and create activities in The Sandbox’s metaverse for community members to meet up and participate in events.

The platform intends to create a Decentralized Autonomous Organization (DAO) that will be governed by community members, with additional “SubDAOs” within the community.

Balthazar is a play-to-earn gaming community and platform that focuses on GameFi and the launch of new NFT games. By establishing a scholarship program, the gaming guild hopes to lower the barriers to entry for gamers interested in play-to-earn games.

They’ve also devised a rent-to-earn program in which NFT owners can lease their NFTs to Balthazar and receive a return on their investment.

Balthazar began as a play-to-earn gaming guild, however, it has grown into a platform that deals with multiple sub-industries within the NFT and crypto gaming space. The platform intends to become a central hub for P2E gaming as well as NFT renting, trading and borrowing.

An in-house NFT marketplace is also being built for the community to buy and exchange NFTs. The marketplace, called Balthazar List, is a platform where game creators can launch games with the help of community members through crowdfunding.

Play-to-earn and NFT-based games are becoming increasingly popular. The most popular NFT game, Axie Infinity, produced more than $64 million in December alone, bringing the total income for 2021 to over $1 billion.

However, playing pay-to-win games necessitates an initial investment in NFTs. Depending on the game, entry fees can range from around $100 to a few thousand dollars. New players who cannot afford to purchase NFTs may find it challenging to participate due to the high admission prices.

Members of the guild can rent out their in-game NFTs to community scholars, giving them access to games like Axie Infinity and Thetan Arena. The community members who rent out the NFTs to these scholars then split their P2E gaming revenues with them.

Yield Guild Games (YGG) is a P2E and NFT gaming guild. The guild operates as a DAO and community members can invest in in-game NFTs. One of the goals of this community is to create an ecosystem of P2E gamers and investors who can help to facilitate the growth of NFT gaming.

The YGG DAO is the platform’s own Decentralized Autonomous Organization, which is administered by its users. Smart contracts will be used by this decentralized community to carry out certain guild operations. The distribution of awards and the automation of NFT rents amongst community members will be among these operations.

When guild members rent out any in-game NFT assets controlled by the Yield Guild Games platform, they will get YGG tokens in return. For example, guild members can rent Axies from the Axie Infinity game to earn their in-game cryptocurrency known as SLP.

The token, Smooth Love Potion (SLP) can be farmed in Axie Infinity using Axies from YGG. SLP acquired during these games would be returned to the DAO, with the player getting a certain amount of YGG tokens in exchange for participating inside the DAO’s framework. YGG tokens will be required to interact with the governance and other services.

The YGG DAO’s assets are maintained by a treasury. In-game NFTs and virtual land are among the assets being maintained by YGG’s founders. The founders supervise the management of the assets using a consensus method in which at least two of the founders must agree on a decision.

The platform, on the other hand, aspires to move to a system in which community members vote on how these assets are administered.

Merit Circle is a DAO and NFT gaming guild dedicated to helping its members earn more money in P2E games. The goal of the platform is to increase the possibilities for players to make a living through blockchain gaming.

Merit Circle DAO is made up of the main DAO that oversees a slew of sub-DAOs that act as tentacles across the Play-to-Earn business. Through governance enabled by MC token holders, the protocol is maintained by numerous independent groups and people.

The community offers scholarships and educational opportunities to aid gamers in their quest to earn cryptocurrency in the metaverse. This way more players will be able to participate in P2E gaming which will help to build out the NFT gaming ecosystem further.

Merit Circle allows players to borrow in-game NFTs in exchange for a cut of the profits earned from P2E gaming. Players are taught how to play and how to optimize their gaming techniques to maximize income for the DAO. The profits that are returned to the DAO are used to buy NFTs, plus fund future investments, and proposals.

Vulcan Forged, a P2E game, was one of Merit Circle’s earliest scholarship programs. Vulcan Forged is an open-world enormous multiplayer online role-playing game (MMORPG). Players may earn money by going on missions and competing in tournaments for NFTs.

In addition, the DAO spent $500K for 100 VulcanVerse land plots and Vulcanite NFTs. Scholars can borrow plots of land and characters to begin playing the game, or they can borrow a greater NFT than they presently have to boost their profits. These players’ earnings are subject to a charge, which goes back into the Merit Circle coffers.

Avocado Guild (AG) is an NFT gaming community that aims to help P2E gamers to thrive in the blockchain gaming space. The guild focuses on building a network of highly skilled and engaged players.

As with most other guilds, they have a program where they lend out in-game NFTs through a scholarship program. The guild also provides training and support to help players who are not familiar with P2E gaming get started.

The guild also has its decentralized organization, Avocado DAO which aims to acquire in-game NFTs across multiple different genres, which will then be leased out to community members. Additional plans for the DAO include creating new partnerships, onboarding new scholars, and integrating automated processes through the use of smart contracts.

While there are benefits to adopting NFTs in gaming, there are also significant obstacles to overcome. NFTs, in particular, must be made more attractive and accessible to general customers who aren’t necessarily tech-savvy.

Because NFTs have inherent value, there’s a chance that some of them will be primarily employed as speculative assets. This possibility may encourage players to buy in-game assets in the hopes of later selling them for a profit rather than using them as intended within the gaming environment.