Abstinence from DeFi is ‘no longer an option,’ states founder of Polygon-based QuickSwap 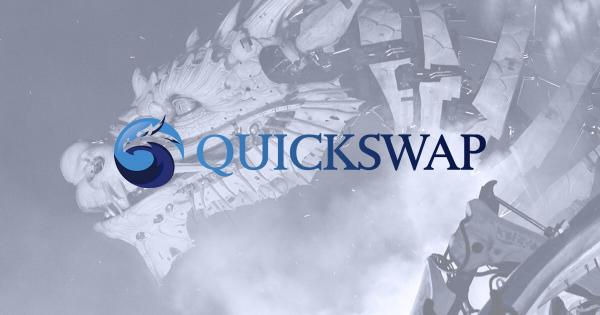 The founding member of the biggest DEX on Polygon shared his thoughts on sustainability of Layer-2 solutions, as he addressed the controversial EIP-1559 upgrade.

Sameep Singhania is a blockchain and software engineer, who has worked on several projects, including Bonded Finance and ParaSwap, but hit the DeFi nail on the head when he and his team, frustrated by the growing Ethereum (ETH) fees, built QuickSwap (QUICK), a popular Layer-2 decentralized exchange (DEX).

QuickSwap is an Ethereum-based DEX powered by the Polygon (MATIC) network, a Layer-2 scaling solution that gained traction due to friendly transaction fees, which enabled Singhania’s DEX to facilitate token swaps at a lower cost.

According to Singhania, “abstinence from DeFi products is no longer an option for the world’s financial systems,” that, along with the governments, need to figure out how to “synchronize their operations with DeFi products.”

QuickSwap’s total value locked (TVL) surpassed 1 billion in a matter of months and the DEX’s user base only seems to be growing.

Happy to share that #QuickSwap has the highest daily active users of any #DEX on @DappRadar in the last 24 hours! 🎉

It seems users love the low fees that @0xPolygon provides. We are ready for even more growth 🐲 pic.twitter.com/BNn2P49j8R

“Layer-2 solutions are devoted to the specific purpose of improving scalability. This single-mindedness allows them to bypass Layer-1-related concerns and provide users with quick transactions while still enjoying the native networks’ security and decentralization benefits,” according to Singhania, who clarified that “Layer-2 solutions’ primary reason for existence is the native limitations of Layer-1 platforms.”

“However, on the flip side, there are minuscule chances of failure for Layer-2 solutions. This includes worst-case scenarios like collusion and mass exodus,” he admitted, while underscoring that “the probability of such situations unfolding is truly minimal.”

How liquidity pools became an integral part of the ecosystem

“For our service as an automated market maker, liquidity pools have eased the transition for traders to embrace an algorithm-based trading system. Also, the increase in liquidity providers has catalyzed our working as a truly decentralized exchange,” Singhania explained.

“By sharing a part of the trading fees with them, QuickSwap has ensured liquidity providers earn a substantial reward for their efforts. To further this facility, we have provided yield farming and liquidity mining opportunities,” he added, as he outlined how QuickSwap successfully incentivizes liquidity providers to park their tokens in the liquidity pools.

“Do you need more swaps and transactions in the market? With sufficient liquidity, it is possible. Would you like 24/7 trading of tokens with zero downtime? Liquidity pools make that happen,” said Singhania, as he broke down how Quickswap, by setting up a perpetual system in liquidity pools, facilitates traders to buy and sell their tokens without waiting for a counterparty.

The EIP-1559 upgrade and its impact on scalability

“I love the vision of this upgrade to ensure the transaction fees are less volatile and predictable. But, did it answer the elephant in the room i.e. the unimaginable fees? Not really. Though the perception was created that the EIP-1559 upgrade was going to reduce Ethereum’s fees, the reality was far away,” Singhania commented on the Ethereum Improvement Protocol 1559.

Singhania pointed out that “miners’ revenue and users’ fee didn’t budge by a lot,” despite a substantial amount of transaction fees being burnt and removed from circulation.

“With the NFT market rallying, I don’t see the upgrade having a telling impact on both of the mentioned metrics,” he concluded.

However, he recognizes the upgrade as “a great step taken towards stabilizing gas costs in the long term,” while predicting Ethereum to grow as a token of value, due to its gradually decreasing supply.