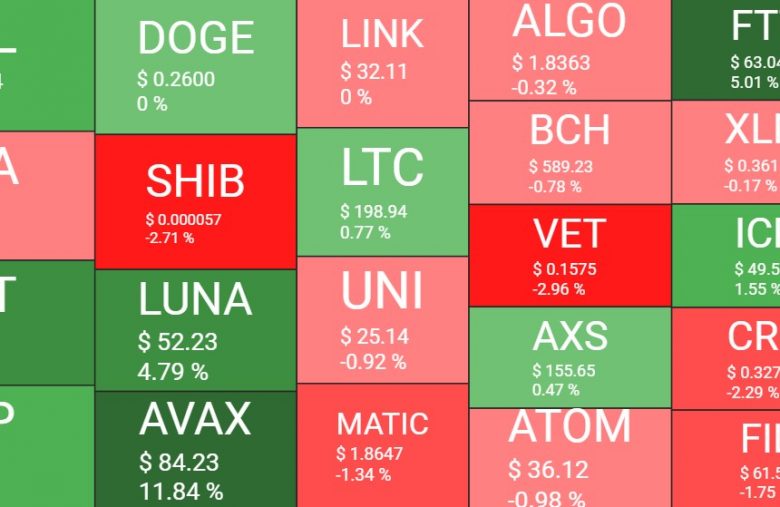 Bitcoin’s indecisive price movements have continued in the past 24 hours, with the cryptocurrency staying above $60,000. Binance Coin has been among the best performers from the larger-cap alts as the asset has neared its ATH.

Most alternative coins were slightly in the red yesterday, as reported, but the landscape is relatively different today. Ethereum had fallen below $4,500, but a minor 2% increase on a 24-hour scale has driven the second-largest cryptocurrency to above that level.

Solana has touched $250 after a similar price pump. Polkadot has marked another all-time high after a 5% surge since yesterday. Dogecoin, Ripple, and Terra are also in the green.

Avalanche has gained the most from yesterday and also saw a new record above $85.

Binance Coin, on the other hand, has performed well in the past several days. Another 8% increase in a day has driven BNB to $670, which is the highest price level since mid-May. The asset is just inches away from marking a new ATH of its own, while its market capitalization has risen well above $100 billion.

While some alternative coins have registered impressive gains and new all-time high records, bitcoin has been relatively calm in the past week, especially since it started retracing from the mid-week peak at $64,000.

The cryptocurrency fell to $60,000 shortly after when inflation news emerged from the US but recovered just as quickly. It has remained in a range between that coveted level and $63,000 for the most part, and even the controversial US infrastructure bill passing in Congress couldn’t move it a lot.

After an unsuccessful attempt to overcome $62,500, BTC has returned below $62,000 once more. Its market capitalization has reclaimed $1.150 trillion, while the dominance over the alts has been further reduced to just over 42%.