Bitcoin Is Now More Valuable Than The Russian Ruble 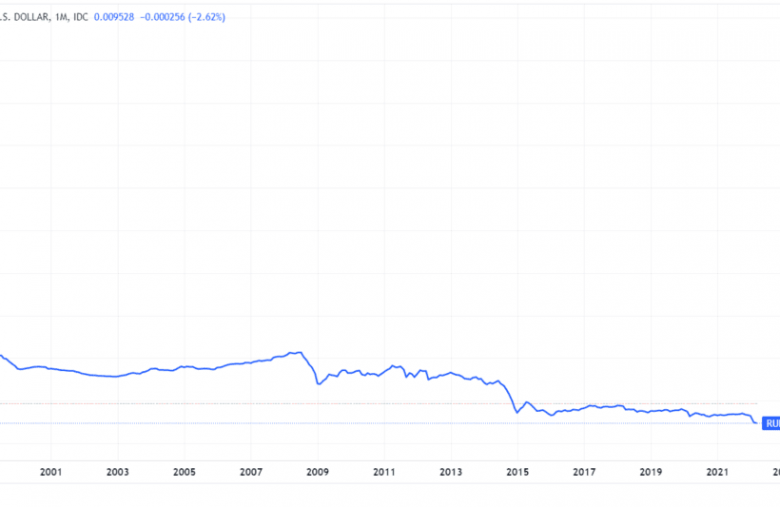 Bitcoin is in the big leagues of the global financial system, and geopolitical events are playing in its favor.

The most important cryptocurrency in the market managed to position itself above the Russian Ruble in the global ranking of currencies with the largest capitalization, after a resounding crash of the Russian Ruble to lows not seen in the last 30 years.

A simultaneous recovery of almost 15% in Bitcoin’s price over the last 24 hours subsequently pushed it above the capitalization of the Mexican peso and the Thai baht later on.

With this surge, Bitcoin enters the top 15 most valuable currencies, surpassing countries such as Saudi Arabia, Israel, and Sweden.

The next rival to beat is the Swiss franc, with an approximate capitalization of 29,021,260 BTC. Considering that the current BTC in circulation is about 18,971,018 tokens at the time of writing, a 52% rise (under ceteris paribus conditions) would be required for Bitcoin to celebrate the capture of a new step in the global ladder.

If Bitcoin is compared to the market capitalization of the world’s largest companies and commodities, the cryptocurrency has already surpassed the entire market capitalization of all the palladium in the world. It is the ninth most valuable asset in the world, outperforming Meta, Berkshire Hathaway, Visa, Mastercard, JP Morgan Chase, and the world’s largest ETF: the SPDR S&P 500 ETF Trust.

Above Bitcoin lies the electric car manufacture Tesla – which incidentally has large amounts of money invested in BTC – and then silver as the commodity to beat with a capitalization above $1.3 trillion.

For those curious, at the moment, the entire crypto market would rank #5 on the list with a combined worth of $1.9 trillion. Gold is the undisputed king with $12.1 trillion in capitalization.

How The War Between Russia and Ukraine is Impacting Bitcoin

The flipping has not gone unnoticed by the cryptocurrency community, who quickly picked up on the news.
The crypto community has, in general terms, taken sides, speaking out and acting in favor of Ukraine, so the overall sentiment was positive, almost like a “take that, Russia” kind of vibe.

The Ukrainian government has divulged a Bitcoin address to receive donations immediately and without any danger of potential censorship. According to estimates, in cryptocurrencies alone, Ukraine has received $20 million in funds to finance the war.

But just as Ukraine has benefited, there is also the possibility that Russia will, and the Ukrainian government itself has called for censorship of Russian user wallets as a pressure measure.

But Bitcoin is neutral, and Bitcoin trading has spiked among Russians hedging against the devaluation of their own currency.