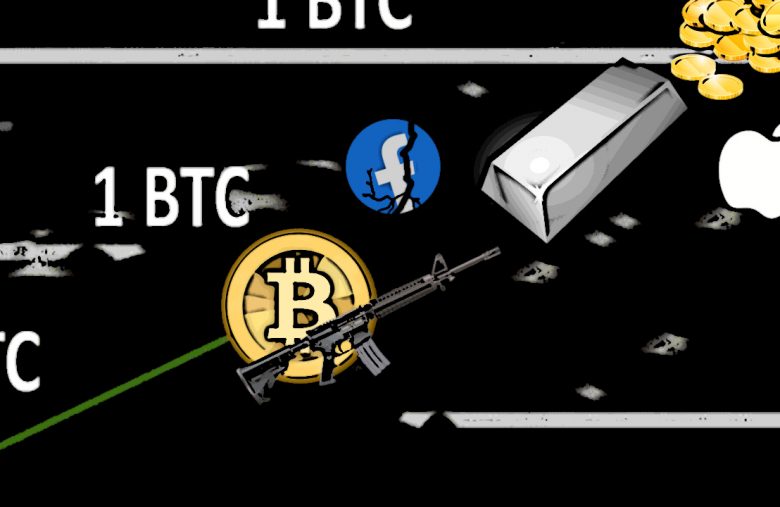 The price of bitcoin had crossed the $60K zone at 1:30 a.m. (EST) early Friday morning. The leading crypto asset’s latest price jump has made it so bitcoin’s overall market valuation of $1.119 trillion has surpassed Facebook’s market capitalization. The digital asset is also nearing the entire net worth of all the silver in the world as bitcoin is 17.3% away from surpassing the precious metal’s overall capitalization.

Bitcoin Surpasses Facebook’s Overall Worth, Needs to Gain More Than 17.33% to Exceed Silver

Bitcoin is currently the eighth-most valuable asset in the world just above the market valuation of the corporate entity Facebook’s market cap. Today, statistics from the website companiesmarketcap.com indicate that BTC’s market cap is $1.119 trillion and Facebook’s market valuation is $926.27 billion. It’s not the first time bitcoin (BTC) surpassed the social media company’s entire value, BTC grew larger than Facebook during the first week of January this year.

Interestingly, at that time, BTC was only changing hands for $41,462 per unit while Facebook’s market cap was $758 billion. Today, both BTC’s and Facebook’s market caps are higher and Facebook is valued at $926.27 billion. Alongside this, in January 2021, BTC still had yet to surpass Tesla, but today’s market valuations show BTC is two spots ahead of the electric car manufacturer. BTC is also ahead of Berkshire Hathaway (BRK-A) as the overall worth of BRK-A shares is $636.97 billion on Friday.

The next asset BTC needs to surpass is silver (Ag) as all the silver in the world today is estimated to be worth $1.313 trillion. BTC’s $1.119 trillion valuation needs to exceed 17.33% in order to get past the overall net worth of the global silver supply. In addition to silver, gold (Au), Apple, Microsoft, Saudi Aramco, Alphabet (Google), and Amazon are ahead of BTC as well. BTC has a long way to go to outpace the top precious metal, Au, as it must gain more than 905% just to outperform gold’s global worth.

In order to beat the second most valuable global asset, Apple (AAPL), the leading crypto-asset must exceed gains of more than 112.3%. At that point, BTC would be the second-most valuable asset worldwide. In order for BTC to overtake AAPL’s overall market valuation, the crypto would need to be valued at $125,257 per unit. Of course, that $125K estimate is based on the number of BTC in circulation today and by then more bitcoins will be issued which means the $125K estimate would likely be lower.

With Friday’s current 18,844,512 circulating supply of BTC in existence, in order to beat gold, each bitcoin would have to be worth $619,500. Another interesting fact is that if BTC ever surpasses Apple and comes close to the overall market valuation of gold, Bitcoin’s unknown inventor will be the world’s richest person (or group).