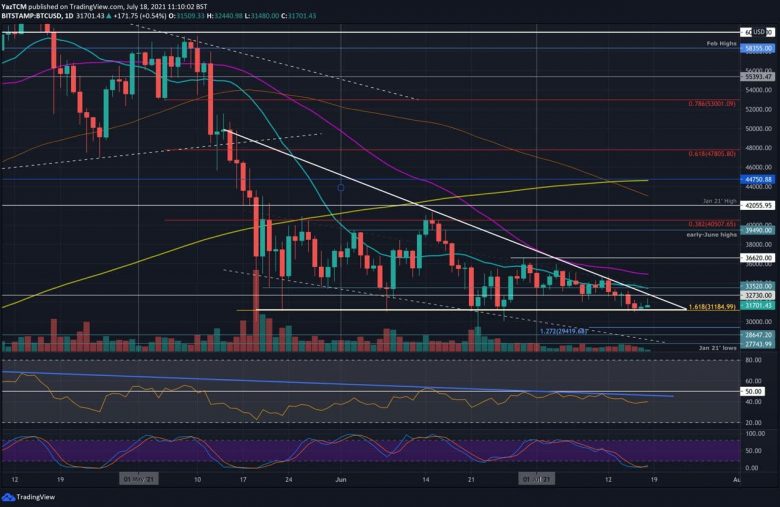 BTC is down a total of 6% over the week, as of now, while it currently battles to remain above $32K. The primary cryptocurrency has been trading inside a long period of consolidation between $30K and $40.5K since the mid-May capitulation candle and between $30K and $35K over the past month.

This consolidation can be seen in the form of a bearish triangle, as shown below on the daily chart.

Same as it happened over the past weeks when BTC tested the $30-31K lows, this week’s low lies amid the same support line – $31K from Friday.

This critical range has supported the market on numerous occasions since mid-May. Thus, it will be a crucial support to defend to prevent a slide beneath $30K.

BTC is now quickly approaching the apex of the triangle, as seen on the following daily chart, indicating a potentially colossal move incoming over the next days or even hours.

So far over the past month, Bitcoin was able to “fix” the weekly candle by a decent price increase on Sundays, which left a long wick down. It remains to be seen if this ongoing Sunday will end up the same way.

Looking ahead, the first support lies at $31,700 – the lower angle of the short-term ascending price channel. This is closely followed by a critical support area amid the $30-31K range, which is the lower boundary of the triangle.

The daily RSI remains beneath the midline and below the long-term descending trend line (blue line), preventing momentum from creating a higher high since February. A breakout of this blue line would indicate that the momentum is finally ready to increase on a longer-term basis.