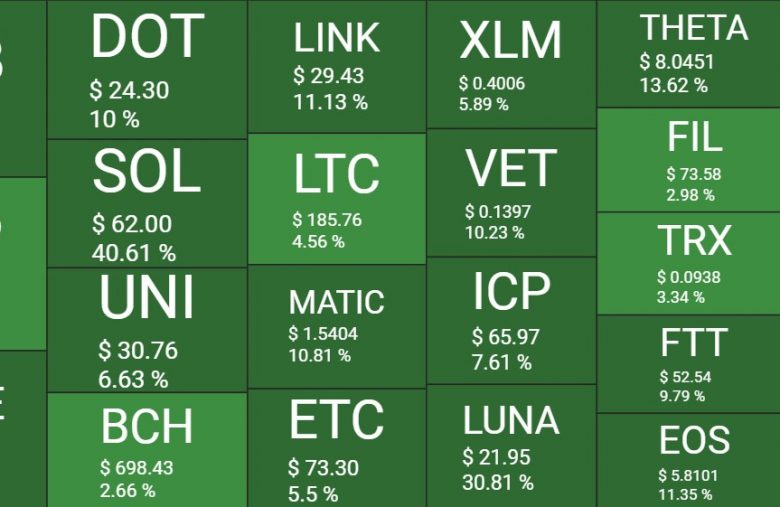 The crypto market cap has topped $2 trillion again as the altcoins went on a tear. Dogecoin went up by 16%, while SOL skyrocketed by 40%.

After another drop to below $46,000, bitcoin bounced off rather nicely and even tapped $48,000 briefly. However, the alternative coins have registered significantly more notable gains on a 24-hour scale, including a new all-time high for Solana and Dogecoin pumping 16%.

The market-wide retracement on Sunday was short-lived, and the alternative coins are back on the offensive. Ethereum has jumped by about 3.5% in a day and is just shy of $3,300.

Ripple, which was the most substantial gainer yesterday, is also up with a similar percentage. Binance Coin (5.5%), Cardano (5.5%), and Uniswap (6.5%) have painted even more impressive increases.

Dogecoin has surged by about 16% in a day, perhaps fueled by the recent support from world-known billionaires, such as Mark Cuban. As a result, DOGE trades at $0.34.

Polkadot (10%), Chainlink (11%), and MATIC (11%) have seen double-digit pumps as well, while Solana has stolen the show today. SOL has exploded by 40% and registered a new all-time high above $64 earlier.

As such, the cryptocurrency market cap has added about $100 billion since yesterday’s low and is back above $2 trillion.

The primary cryptocurrency also fell yesterday after several consecutive days of price increases. Just after it exceeded $48,000 for the first time since mid-May, the asset dropped by nearly $3,000.

As a result, it tested $45,500, but the bulls stepped up at this moment and reversed the trajectory. In the following hours, BTC started to gradually recover its value.

It initially spiked above $46,000 before reclaiming $47,000. Bitcoin went as high as $48,000 again, but the subsequent rejection drove it a few hundred dollars south. Nevertheless, BTC still trades above $47,000 as of writing these lines.

Although its market capitalization has neared $900 billion again, the dominance over the altcoins has decreased, somewhat expectedly, to under 44%.