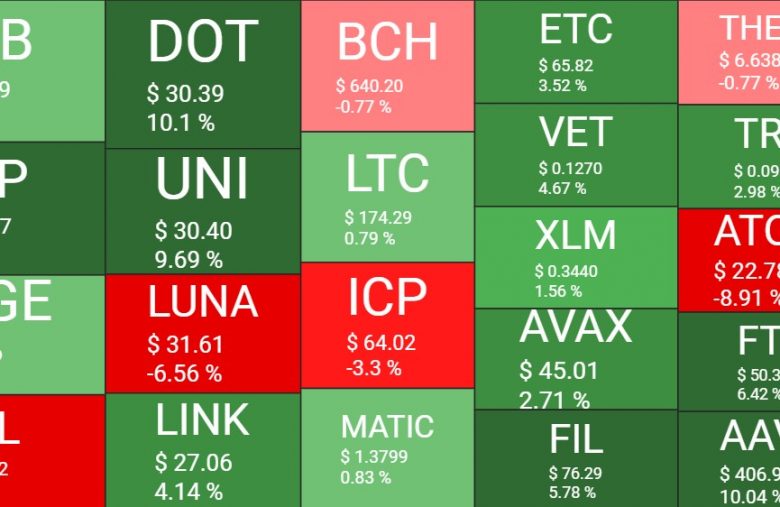 Bitcoin’s dominance has dropped by 1% in a day as BTC dipped below $47,000. ETH, DOT, and UNI have charted impressive gains.

Bitcoin’s recent struggles continued in the past 24 hours as the asset dropped to a five-day low of around $46,500. In contrast, some alternative coins have been on the rise. Ethereum is a prime example as it jumped above $3,500 for the first time in more than three months.

It’s safe to say that most altcoins have been outperforming Bitcoin in the past few weeks. Ethereum, for instance, had dropped below $3,200 on Monday. However, the second-largest crypto has added more than $300 since then.

As a result, it breached $3,500 for the first time since mid-May, and it still trades above that level.

Ripple has gone up by a similar percentage as ETH in the past 24 hours and tapped $1.2 hours ago. Even more gains are evident from Polkadot and Uniswap, both of which have surged by around 10% in a day. Interestingly, DOT and UNI have also reclaimed $30.

Binance Coin and Dogecoin are slightly in the green, while Cardano – another recent high flyer – has stalled around $2.8.

Solana, which has marked consecutive all-time highs lately, has retraced by 8% in a day to around $110.

Revain has added the most value on a 24-hour scale with a 22% surge. Kusama, whose next parachain auctions start today, has gone to a multi-month high of over $400.

OKB, Elrond, Aave, and Arweave have also charted double-digit price increases, but the cumulative market cap has remained below $2.1 trillion.

While some alts are heading north recently, bitcoin has struggled. The primary cryptocurrency failed at remaining above $49,000 during the weekend as the bears came back to play.

In the following few days, BTC firstly dipped below $47,000, tried to recover some ground, and pumped to nearly $49,000 once again before being pushed south in the past 24 hours.

The market capitalization is just shy of $900 billion, but BTC’s dominance over the altcoins has dropped significantly. The metric has declined by about 3% in a few weeks and is down now to just over 42%.