Bullish? Bitcoin Whales With More Than 10,000 BTC at an All-Time Low 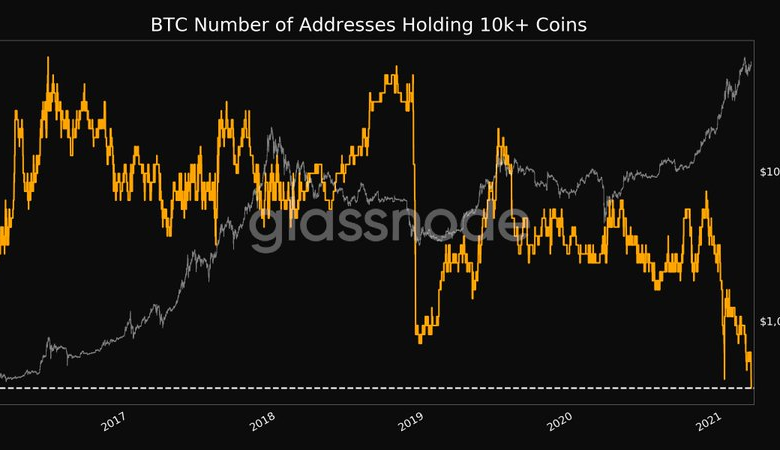 Bitcoin’s distribution has become substantially less concentrated as the number of whales holding 10,000 or more coins has reached a new all-time low of less than 100 such addresses.

At the same time, the number of transactions on the BTC network and exchange deposits continue to decrease to monthly lows.

The so-called BTC “humpback” whales are massive wallets containing 10,000 or more coins. From a USD perspective, this amount would represent holdings worth at least $550 million as of today’s prices.

According to data from the monitoring resource Glassnode, such addresses have plummeted in numbers since the start of this year. At the time, there were 115 wallets holding so many bitcoins but have dropped to just over 90 – a new all-time low.

This could be attributed to BTC’s skyrocketing price in the past several months as the cryptocurrency expanded its value by more than five-fold since October. As such, whales could have gone for profit taking by disposing of some of their holdings.

CryptoPotato reported that such sizeable wallets had sold off at least 140,000 bitcoins (worth roughly seven billion) in February, approximately when BTC peaked at $58,400.

Over a longer horizon, the number of humpback whales has decreased by about 30% since 2019. This suggests that the primary cryptocurrency’s distribution has become significantly less concentrated compared to just a few years ago.

BTC on Exchanges and Daily Transactions Decrease Too

While the large bitcoin addresses have declined in recent months, so have the exchange-related activities. Further Glassnode data revealed that the number of exchange deposits (7-day moving average) had reached a monthly low of less than 2.7 million. Just for reference, the number was north of 3.6 million in mid-January.

In contrast, the withdrawals from trading venues have only intensified recently, which led to reaching a record low number of bitcoins held on exchanges.

Additionally, the BTC network has seen a decrease in transactions as well. The analytics company indicated that the number of daily transactions (7d MA) had reached a low of just over 12,300 while it was well above 15,000 earlier this year.