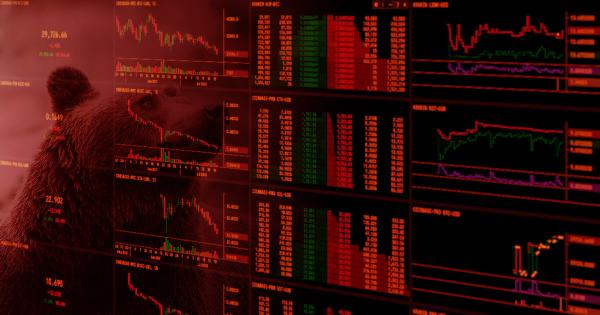 Many traders fear that the bear market might officially be here after dropping more than 50% from all-time highs on average.

Several large-cap decentralized finance (DeFi) tokens, such as Badger, ThorChain, Alpha Finance, and others, have now fallen up to 85% from their 2021 highs.

And the rout continues. As Bitcoin fell 5% in the past day, large-cap cryptocurrencies like Cardano, Dogecoin, and XRP saw double-digit percentage declines, with hundreds of millions of dollars sifted off their respective market caps.

The Bitcoin chart looks bearish on all time frames. The big weekly support ($32,500) also broke and further downside is expected this week. It is very likely that the price might dip below the $30,000 daily support.

That support has been tested a number of times already and in case it fails the next big support is in the $28,000 region.

It is very possible to see such low levels as the weekly close was bearish. And the last time such a bearish close took place it led to a 40% drop in the price.

The only bullish scenario that can be seen is the formation of a potential falling wedge. But it still needs confirmation and it might take a few days for that.

The Relative Strength Index (RSI) is still not oversold on a daily timeframe, meaning sellers are in control as buyers await lower support levels.

A silver lining, meanwhile, came in the form of Glassnode, a popular on-chain data analysis tool, reporting that Bitcoin outflows from centralized exchanges continue to grow and over 2,000 BTC are withdrawn daily, a metric daily suggesting the asset’s accumulation.

What’s next for ETH?

Ethereum (ETH), similar to Bitcoin, remains in bearish territory. There are no big supports at the current levels and the support is in the $1,680 region.

This means it is very likely that the price will push lower in the coming days and a continued downtrend is possible.

The Relative Strength Index also is headed towards an oversold position. However, the volume looks very flat, indicating a lack of buyer interest.

As Bitcoin looks bearish and a drop is possible it is possible that ETH price falls along with the former and sees lower levels.