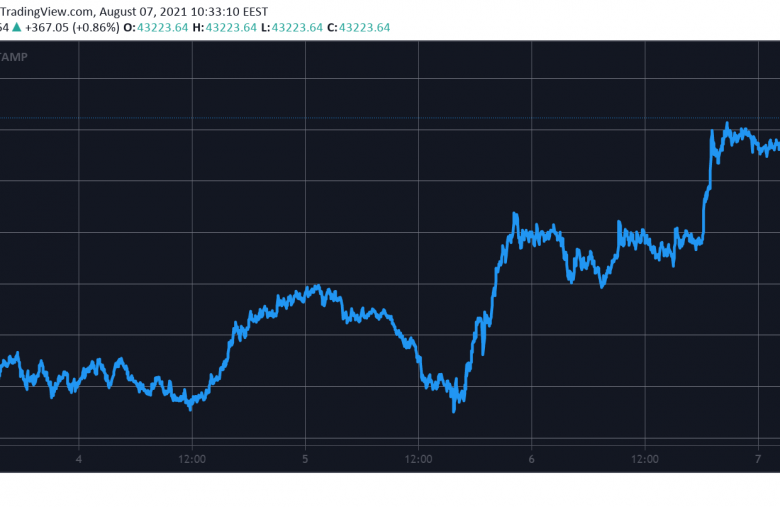 The cryptocurrency market cap has registered a multi-month record as bitcoin skyrocketed to $44,000 and the altcoins are deep in green.

The bitcoin bulls came to play once more and pushed the cryptocurrency to a new near three-month high of around $44,000. Most alternative coins have seen gains as well, with ETH closing down to $3,000. The total market cap added another $100 billion in a day.

Ever since the middle of the week, bitcoin’s price has been on a roll for most of the time. It recovered thousands of dollars in days and reached $40,000 on Thursday.

At the time, though, the bears briefly regained control and pushed the asset south to just over $37,000. However, this retracement was short-lived, and BTC went on to mark even more substantial gains.

In the following days, bitcoin reclaimed $40,000, but this time kept climbing. The leg up resulted in reaching $44,000 (on Bitstamp), which became the highest price tag in almost three months – since the mid-May crash.

As of now, BTC has retraced by a few hundred dollars but still stands above $43,000. Consequently, its market capitalization has risen to north of $800 billion for the first time in months.

Altcoins in Green; Multi-Month Records for the Market Cap

The alternative coins have mimicked to a large extend BTC’s performance this week. Ethereum’s trajectory has been even more impressive. Perhaps fueled by the hype around the London Hard Fork, which occurred earlier this week, ETH’s price is up by more than 20% since last weekend.

Furthermore, the second-largest crypto neared $3,000 hours ago for the first time since mid-May as well. The rest of the market is also well in green.

This includes similar increases of around 4% for Binance Coin, Cardano, Ripple, Chainlink, Bitcoin Cash, and Litecoin. Additionally, Dogecoin (6%), Uniswap (7%), and Polkadot (10%) have surged even more.

Ultimately, the cumulative market capitalization added another $100 billion in a day and went to just shy of $1.8 trillion. This became the metric’s highest level since late May.