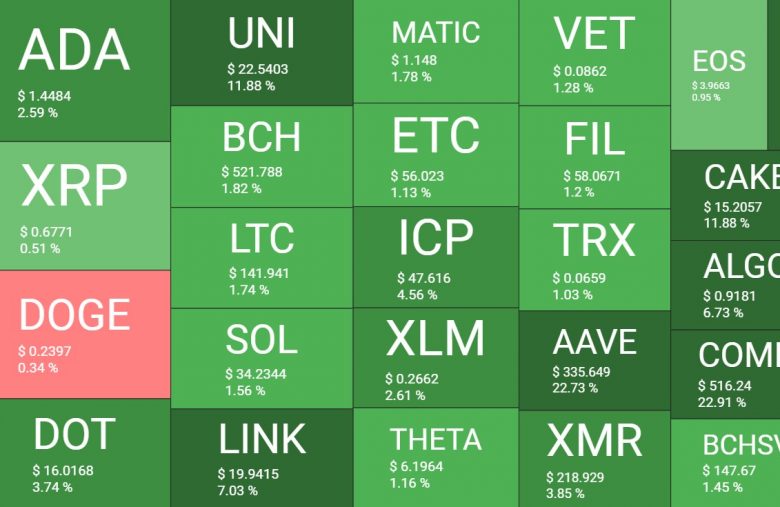 While bitcoin has added $2,000 in the past 24 hours, several DeFi coins, including UNI, Aave, SNX, and COMP, have charted impressive double-digit gains.

Following another drop to around $33,000, bitcoin has bounced off and neared $35,000 once again. The alternative coins, especially some connected to the DeFi sector, have seen more substantial gains, with Uniswap rising 11% and Aave and Compound jumping by more than 20%.

After marking minor losses yesterday, most of the altcoin field is well in the green today. Ethereum dipped below $2,300, but a 3% increase has driven the asset to well above that level.

Binance Coin has seen even more considerable gains following a 6% jump. As a result, BNB has reclaimed $300 and has neared $320 – the highest price line since June 18th.

Uniswap has spiked the most from the larger-cap altcoins by 11%. Consequently, UNI has risen above $22. Interestingly, other DeFi-related alternative coins have also performed well since yesterday.

PancakeSwap has copied UNI’s increase and currently stands above $15. Aave and Compound are up by 21% to $333 and $515, respectively. This comes shortly after Aave announced plans to launch DeFi services for institutions.

The cumulative market cap has recovered some ground in a day and is close to challenging $1.5 trillion.

Bitcoin Closes the Gap to $35K

The primary cryptocurrency also fell yesterday to just over $33,000. That came shortly after reaching a four-day high of $36,000 during the weekend.

However, the bulls have regained control after the most recent dip and have pushed the asset north again. As a result, bitcoin has reclaimed almost $2,000 and is close to breaking above $35,000 once again.

Its market capitalization has remained around $650 billion, but its dominance over the altcoins has suffered. The metric is down below 45% as most alternative coins have outperformed BTC in the past 24 hours. Just for reference, BTC’s dominance was above 46% a few days ago.

Despite being 2% up on the day, though, a popular crypto analyst argued earlier that the asset’s inability to chart a new high for almost three months had signified the end of the bull market.