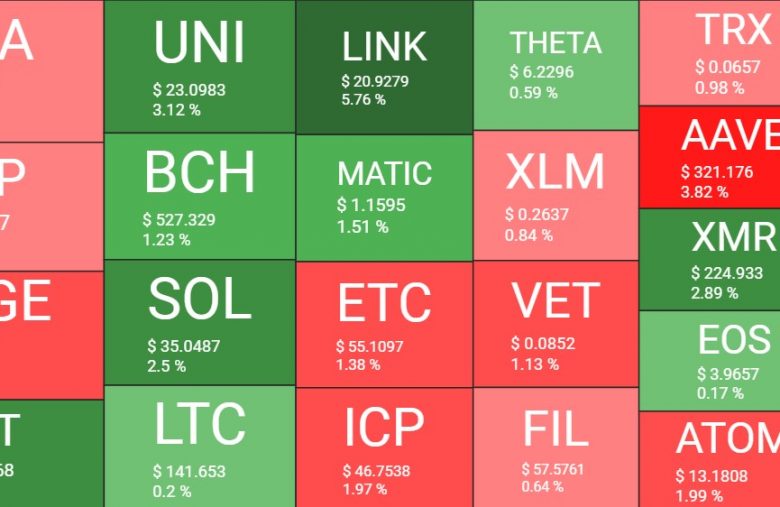 After yet another negative development coming from China, BTC dropped by more than $1,000, but it has bounced off and is near $35,000 again. Nevertheless, its dominance has reduced further as some altcoins, including ETH, BNB, DOT, UNI, and LINK, have charted impressive gains.

Apart from some brief retracements yesterday, most of the altcoin field has been charting impressive gains, especially tokens related to the DeFi industry, as reported yesterday.

Nevertheless, ETH has also enjoyed the past several days after it recovered from its dip below $2,000. In the past 24 hours alone, it pumped from a daily low of $2,250 to its current level of almost $2,400, which is its highest price line since June 17th.

This comes amid a confirmation from Ethereum developer Tim Beiko that the long-anticipated London hard fork will take place on August 4th with block 12,965,000.

Binance Coin has also seen impressive gains in the past 24 hours, with a jump to a three-week high of its own at $335.

For a second consecutive day, KuCoin Token has surged the most with another 30% increase. KCS trades above $14 as it’s up by nearly 100% in the past week.

After the positive weekend, bitcoin headed straight down on Monday and dumped to just over $33,000. However, the bulls regained control and pushed the cryptocurrency to around $35,000 yesterday.

Nevertheless, another set of negative news coming from China and its central bank brought back the bears into play. In just a few hours, BTC headed south once more by losing more than $1,000.

However, it seems that bitcoin is getting less affected by these frequent ban reminders from the world’s most populated nation as the asset recovered the losses just as rapidly.

Consequently, it trades at just shy of $35,000 once again, and its market capitalization is above $650 billion.

However, the rising altcoins have reduced BTC’s dominance. The metric is down to 44.1%, as it was well over 46% earlier this week.