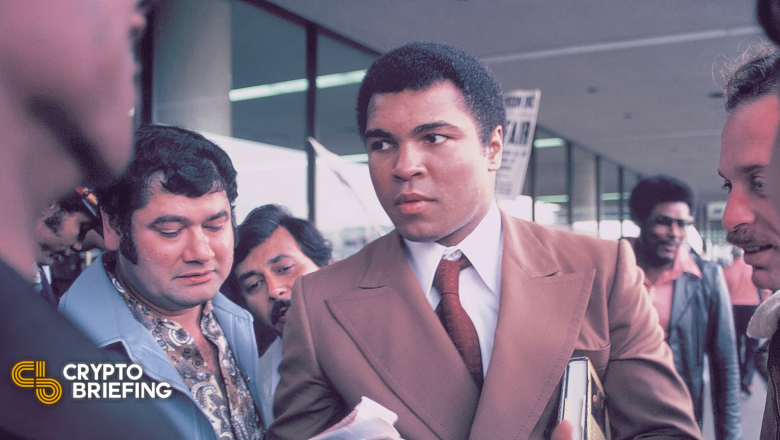 Limited edition Muhammad Ali NFTs will celebrate the 50th anniversary of the “The Fight of the Century” boxing match.

The Ali Collection NFTs on Ethernity

In collaboration with Ethernity Chain, Authentic Brands Group (ABG) and the Ali Foundation will mint non-fungible tokens (NFTs) of The Ali Collection to commemorate “The Fight of the Century” on its 50th anniversary.

The Fight of the Century saw two undefeated boxers, Muhammad Ali and Joe Frazer, face off for the heavyweight title on Mar. 8, 1971, at Madison Square Garden in New York City.  The boxing match that ended in Frazer’s victory is considered to have made a huge impact on the American culture at the time.

To honor the 50th anniversary of the 'Fight of the Century', we’re thrilled to announce The Ali Collection, celebrating the life & legacy of @MuhammadAli .This is the first-ever licensed 'NFT of Historical Significance'. (Photo credit: Neil Leifer, Sports Illustrated) #NFTs pic.twitter.com/m81MMIk6X1

The tokens will record the historical significance of the iconic boxing match that was witnessed by 300 million people on television at the time.

The NFTs will be minted on Ethernity Chain, a blockchain project that works with famous public figures to help them mint limited edition NFTs.  The project has been endorsed by well-known names like the Winklevoss Twins, Alesso, Paolo Maldini, and other celebrities.

The Ali Collection’ NFTs will be dropped in late March 2021, and the proceeds from the sales will be forwarded to the Ali Center- an award-winning museum that is dedicated to the boxer’s life.