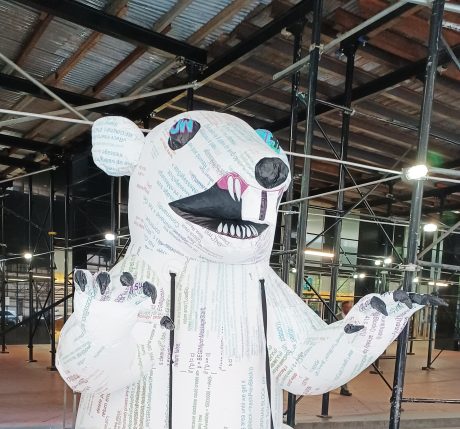 In October 2018, a massive inflatable Bitcoin rat was erected outside of the United States Federal Reserve building by artist Nelson Saiers. Now, the former Managing Director for Deutsche Bank AG and hedge fund manager turned mathematical artist is back at it, as the Fed is up to no good once again.

Here is a glimpse at what is going on at the Fed currently that’s caused Saiers to raise a such a stir, how it involves Bitcoin, and what you can do to take a stand like Saiers has.

Bitcoin wouldn’t be where it is today, trading at more than $40,000 per coin, if it weren’t for early evangelists spreading the cryptocurrency’s message.

No other form of money exists with such scarcity, and it is thanks to a foundation of mathematical code. Math is right up Saiers’ alley. Saiers has been referred to as the “Warhol of Wall Street” due to his financial-based artworks, and received his PhD in Math at the age of 23.

As an artist, he’s produced pieces heavy with geometry and numbers. In one such example, Saiers features $10 bills crushed up in a vending machine costing only 50 cents each.

Here $10 bills are for “sale” for 50 cents. Alexander Hamilton, whose image adorns the $10 was a huge advocate for a “national bank”. His ideas provided the foundation for the creation of the Federal Reserve a century later. Cheap Money (low interest rates which are often impacted by the FED) was a central cause of 2008 Crash, a description reads.

Saiers’ latest piece is also directly outside the Fed, because he’s trying to raise awareness for something he’s shocked there isn’t more “outrage” over: Federal Reserve presidents playing games with rates and other levers while they are also trading securities in their personal accounts.

Crypto has come a long way since Saiers’ last stunt in front of the Fed | Source: BTCUSD on TradingView.com

The latest Bitcoin rat has been slightly modified from the 2018 original. The newest has a black right eye, which represents how the actions of the Fed presidents are “a real black eye” for the Federal Reserve’s “reputation.” The eye also says POW in reference to the proof-of-work consensus mechanism Bitcoin uses. The black eye also references “getting punched” Saiers told us.

Also updated from the original is the sign that said “I smell a rat.” It now reads “I smell 2 weasels” along with the question “does anybody know how to get to Dallas?” Saiers has shared some exclusive photos with us, which you can check out below.

What’s Going On With The Fed?

The situation the art piece is referencing, is an “ethics review” called for by Fed chairman Jerome Powell, in response to letters Senator Elizabeth Warren sent to the Fed’s regional bank presidents demanding stricter ethics policies, especially around each president’s own holdings.

All this comes following several Fed presidents disclosing stock trades, which have come under scrutiny. The “2 weasels” in question are, Boston Fed President Eric Rosengren, who held stock in in Pfizer, Chevron and AT&T, and Dallas Fed President Robert Kaplan who traded seven-digits worth of stocks like Apple, Amazon and Delta Air Lines, according to a CNBC report.

The problem isn’t that these people were trading stocks, but doing so while also – as Saiers points out – making “rate and bailout decisions.”

So how does this all involve Bitcoin? Well, aside from the fact Saiers has used BTC in the past to prove similar points, the lack of noise around Wall Street and traditional markets over this ethical issue has caused him to turn to crypto instead.

“Satoshi couldn’t stand bailouts,” Saiers said, “so I wanted to bring attention to it to the crypto world.” Saiers’ art is now standing in opposition of the Fed right now.

With Saiers’ statement now out there, will crypto help the rest of the world wake up to what is going on right under their noses? And when they do, will they finally understand why Bitcoin is so special? Probably not, but the more central banks cause distrust, the better the case for Bitcoin in the long run.

Special thanks to those like Satoshi, Saiers, and others who selflessly fight causes that effect so many others. If you want to get involved and stop this, buying BTC is one option, but you can also contact your local state and federal elected officials and let your voice be heard.