Institutions Bought Another $620M Worth of Bitcoin as Miners Refuse to Sell: Analysis 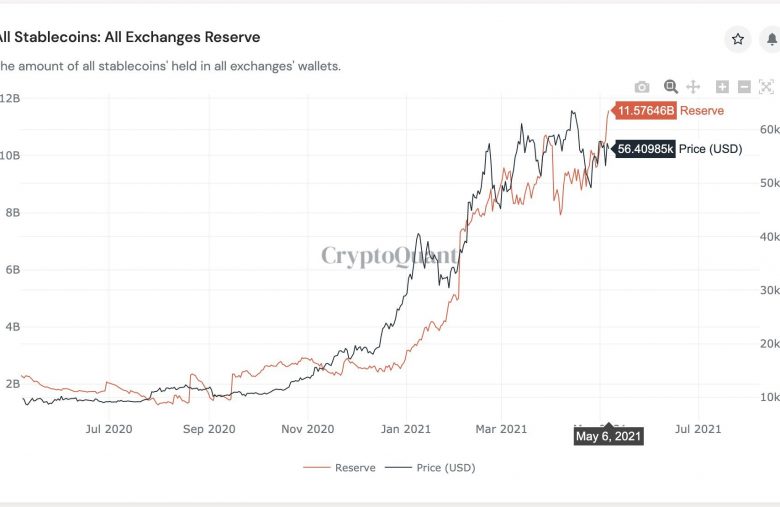 The selling pressure on bitcoin continues to decline, pointed out CryptoQuant by referring to the stablecoins stored on exchanges and miners’ behavior. At the same time, institutional investors keep accumulative sizeable portions of the asset, suggested another massive withdrawal from Coinbase.

BTC Selling Pressure Is Down

BTC investors are continuously withdrawing their holdings from exchanges, which should reduce the selling pressure.

This narrative received further confirmation from on-chain data provided by CryptoQuant. By referring to the Stablecoins Ratio – meaning BTC reserves divided by stablecoins reserves on exchanges – the analytics company noted that “potential selling pressure is weakening.”

This is because the amount of stablecoins on trading venues has reached an all-time high, which could lead to investors purchasing BTC and other altcoins instead of selling.

Additionally, miners have halted their early-2021 selling endeavors as well. Further CryptoQuant data revealed that the known miners’ addresses have ceased transferring their newly distributed bitcoins to exchanges, meaning that the selling pressure from them has also declined.

While miners seem to be refusing to sell their BTC holdings, institutional investors have only intensified their accumulation levels.

As previously reported, substantial withdrawals from Coinbase – among the most preferred platforms for institutions to purchase BTC – indicate large investors’ behavior.

CryptoQuant outlined another massive transfer out of the largest US-based crypto exchange made just hours ago for 11,105 bitcoins. With today’s prices, this amount exceeds $620 million.

Given historical data from previous examples, the price of the primary cryptocurrency could be preparing for a significant boost.