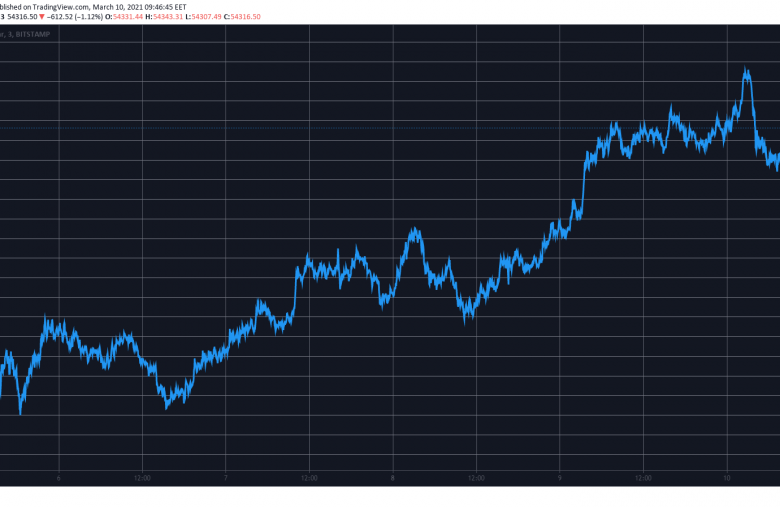 Bitcoin has managed to hit a high at nearly $56,000 today but has since retraced a bit and it now hovers above $54,000. However, BTC’s dominance suffers as some altcoins, including Binance Coin, have surged in the past 24 hours, and the metric is just slightly above 60%.

Ever since the primary cryptocurrency dipped to $47,000 on March 6th, the bulls took control and pushed the asset north. In the following days, BTC firstly reclaimed the coveted $50,000 before heading for a fresh two-week high.

That last part resulted in yesterday’s intraday high at almost $56,000 (on Bitstamp). However, bitcoin failed to breach that level, and the subsequent rejection plummeted its value by $3,000 to $53,000.

Nevertheless, BTC has reclaimed some ground since that low and currently hovers above $54,000.

The technical indicators suggest that the $55,000 is the first significant resistance line in bitcoin’s way up. Should the asset overcome it decisively, the following obstacles are $56,112, $57,685, and the all-time high at $58,355.

Most larger-cap altcoins have calmed following the past few days of turbulence in the cryptocurrency space. Ethereum stands still above the $1,800 price tag, while minor gains for Litecoin have pushed LTC near $200.

In contrast, Polkadot has spiked by 7% to above $38 and has $40 in its sights. Binance Coin is the most impressive gainer from the top ten with an 18% surge. As a result, BNB has jumped to $285 and is just inches away from conquering $300.

Polygon has added the most substantial chunk of value since yesterday after news broke that Coinbase will list the asset. As a result, it has surged by 50% to $0.335.

The somewhat bullish developments in the altcoin market have harmed BTC’s dominance. The metric comparing bitcoin’s market capitalization with all other coins has dropped to 60.2% – just a few days ago, it was at about 62%.