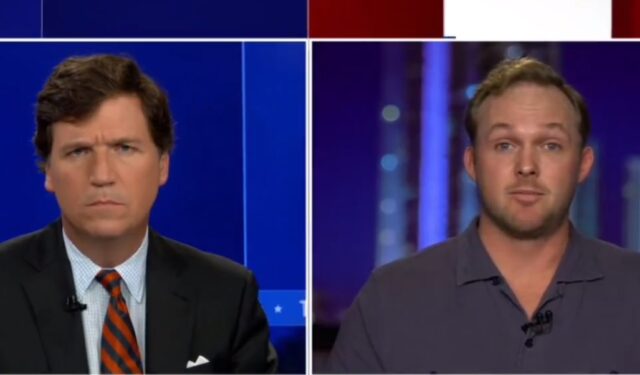 Once again, bitcoin takes the big stage. Marty Bent, host of the “Tales From The Crypt” podcast, told a national audience: “They can only seize your digital currency, your bitcoin, if you’re holding it in an exchange.”

It was in controversial TV personality Tucker Carlson’s show. The general theme, once again, was the Canadian truckers and the different crowdfunding campaigns. Plus, the extreme financial measures that the Canadian government took.

@MartyBent @TuckerCarlson @jespow "Get your #Bitcoin off exchanges! 🔥" Marty Bent Orange Pills The Nation on The Beauty of #Bitcoin for Defending against Tyranny in Canada and Beyond. pic.twitter.com/cwaYLJ4IL1

100% yes it has/will happen and 100% yes, we will be forced to comply. If you're worried about it, don't keep your funds with any centralized/regulated custodian. We cannot protect you. Get your coins/cash out and only trade p2p.

Powell was as direct as they come, “We will be forced to comply. If you’re worried about it, don’t keep your funds with any centralized/regulated custodian. We cannot protect you. Get your coins/cash out and only trade p2p.”

Then, at approximately 3:44, Tucker Carlson hilariously calls Bent’s podcast “Tales From The Crypto” and brings him in. We’ll get to what Marty Bent said about self-custody. Before that, let’s recap the story so far.

What’s All This Business About Canada And Truckers?

A couple of weeks ago, Tucker Carlson explained bitcoin’s value proposition on U.S. National TV. We quoted him explaining the HonkHonk Hodl AKA Bitcoin for Truckers campaign:

“Tally Coin, for example, is a small crowdfunding service that uses Bitcoin. It’s not controlled by banks, that’s the point. They’re hosting a fundraiser for the truckers. Now, why is this appealing? No one can steal the money. No government can pressure anyone to turn the money over, because governments don’t control crypto.”

In his newsletter’s latest number, Marty Bent explains how the situation evolved:

“There is no doubt that the increasing tyranny on display in Canada at the moment has highlighted one of Bitcoin’s unique value propositions; making people financially cancel-proof. Despite the fact the the Canadian government has come out with a court order to “freeze” the bitcoin held in a number of public addresses, there is little they can do if those addresses aren’t possessed by regulated exchanges.”

What Did Marty Bent Say About Self-Custody On National TV?

With the previous situation in mind, Marty Bent explained to Tucker Carlson why bitcoin self-custody is essential:

“It’s much harder for them to seize it if you’re in control of your bitcoin by holding your own private keys, which is the beauty and the importance of bitcoin as a monetary revolution. It allows you to actually control your money. It’s a digital bare instrument. It’s digital cash.

So, as long as people are taking control of their own private keys it’s significantly harder to stop the spread of bitcoin and prevent people from sending transactions.”

After that, Carlson asked how complicated is it for the average person to hold their own keys. And Marty Bent dropped this truth bomb into millions of people’s lap:

“Yeah, it’s very easy. There are plenty of mobile apps you can go download. Whether it’d be Blue Wallet, Green Wallet. You can find those in your IOs Stores or Android Apps. These are open-source wallets that anybody can download and easily create private keys. Send their bitcoin from an exchange directly to a wallet.

They can back up their wallets with 12 words, that, if they were able to memorize them, theoretically, they can walk around with their bitcoin in their heads. So, it’s very simple to access this software that enables you to take control of your bitcoin, and actually custody it yourself.”

To that, Carlson answered with an omen, “You got to think that if they’re zeroing at people’s bank accounts for political reasons,  there’s going to be a rush to cryptocurrency.” It’s only logical, right?

The Freedom To Control Your Money, By Marty Bent

The Tales From The Crypt host finished his prime-time debut with a summary of the macro situation so far. The Canadian Truckers’ case gave bitcoin a living and breathing ad that has been in rotation for days in worldwide news. Highlighting bitcoin’s unique value propositions, day in, day out.

“Over the last few weeks people are really beginning to recognize the beauty of bitcoin. The utility it provides as a distributed network that nobody can control, as long as you’re controlling your own bitcoin and have those words written down, secured. You have the freedom to control your money.”