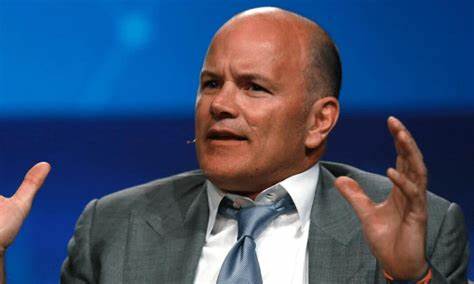 A massive fall in the ruble’s value shows the billionaire investment banker may be right about his dollar prediction.

Mike Novogratz, CEO of digital assets company Galaxy Investment Partners, predicted that the Russia-Ukraine war will boost crypto adoption and lead to the marginalization of the dollar.

“This is a big deal, in a lot of ways. This is starting the acceleration of de-dollarization of the world,” he commented.

The billionaire American investment banker made it clear in a tweet on February 25 that he stood with Ukraine in this war. He also shared a picture with Kyiv Mayor Vitali Klitschko, saying, “I pity the Russian that runs into Klitschko.”

Bitcoin prices witnessed a sudden spike, going well past $44,000 from the below $40,000 level in a matter of two days. Novogratz’s forecast of the dollar’s importance to progressively decline vis-à-vis bitcoin and other digital assets after this war sounds true for the ruble, which saw its value fall by 25% in a day.

Boost for Crypto, Marginalization of Dollar

According to a Bloomberg report, Novogratz believes the war might “push more regular people toward crypto.” But, similar to Ripple CEO Brad Garlinghouse, he doesn’t think that bitcoin is going to be used as a workaround against the hefty sanctions that the Western world imposed on Russia.

It may simply be the case of people reaching out to a currency that works even amidst a war. Novogratz noted the sudden uptick in bitcoin-ruble and bitcoin-hryvnia trading volumes as an example of how “decentralized currency can offer refuge when access to traditional banking breaks down.”

“This sends a message: I want to have money that lives outside of traditional power. That’s why Bitcoin was created, because people don’t trust governments,” Bloomberg quoted Novogratz.

Interestingly, Novogratz seems to suggest China should reduce its reliance on the US dollar as it aims to annex Taiwan. “I’ll tell you one thing, you are going to sell your reserves before you invade Taiwan,” he added.

Michael Novogratz has been a long-time bitcoin bull. In December last year, he told during a CNBC interview that bitcoin’s volatility will gradually decline, and it will become a more stable digital currency. His company Galaxy Digital forayed into the bitcoin mining business by offering financial services to miners in January last year.