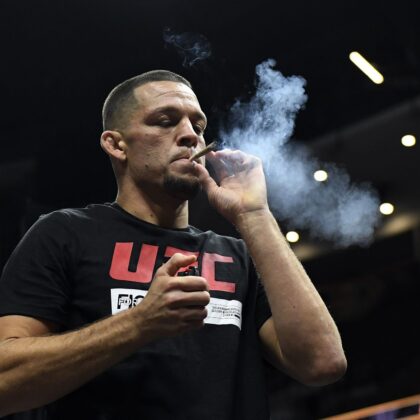 Nate Diaz, welterweight stalwart, has proven this as he went viral right after he lashed out at UFC for marketing his and his brother Nick’s NFT on Twitter.

People have responded with dazed curiosity and excitement about 4/20.

Many sports brand giants like UFC have recently jumped into the hottest mania of NFTs or selling iconic sports highlights or moments to fans. In January of this year, UFC launched Strike, in collaboration with Dapper Labs.

UFC is currently promoting a new Strike pack featuring famous UFC fighting champions Nate and Nick Diaz. So, this might have a clout effect when UFC tweets about the welterweight brothers’ NFTs.

The brothers have a legion of loyal followers that can’t wait to get their hands on the NFTs on 4/20, a symbolic number in the marijuana culture.

Nate Diaz is still with UFC and has one fight left but he has been disappointed with not having his terms met.

He didn’t mince words about his sentiments on UFC and even posted a tweet requesting for his release by the end of March.

The Diaz brothers are well-acquainted with the marijuana culture in their career. Nick has been suspended for five years after he tested positive many times for marijuana.

Apparently, it was not the UFC that suspended Nick Diaz. It was the Nevada State Athletic Commission.

Nate said that he was fined for promoting and using his vape pen. However, the fact is, he wasn’t really suspended or fined by UFC or anyone for that matter. It was the U.S. Anti-Doping Agency who investigated the matter and issued Diaz a warning.

Nate might have been referring to the penalty imposed on Nick, his older brother. Nick was denied a cornerman license because of a failure to pay a fine to the commission.

He still owes $75,000 from his suspension due to marijuana use. The UFC did not sanction him and rather have made a mutually-befitting payment arrangement.

His promoter may have a huge fire to put out and think things are getting too nasty with Nate berating UFC on social media. However, the negative tweet might work to their benefit after all – even UFC rakes the profit.

Nate Diaz’ tweet saying “I hope nobody buys this bullshit” might actually not take his advice and fuel his fandom’s interest to grab their NFTs.

It’s shit like this why I need to get the fuck out of the sorry ass UFC. Didn’t you guys suspend nick for 5 years and fine me hella money for a vape pen?! Now you’re reaping the benefits. I hope nobody buys this bullshit 👎🏼👎🏼👎🏼👎🏼👎🏼🖕🏼 pic.twitter.com/I3yPB9uJT9