Peter Schiff Warns US Faces a ‘Massive Financial Crisis,’ Economist Expects Much Larger Problems Than 2008 ‘When the Defaults Start’ 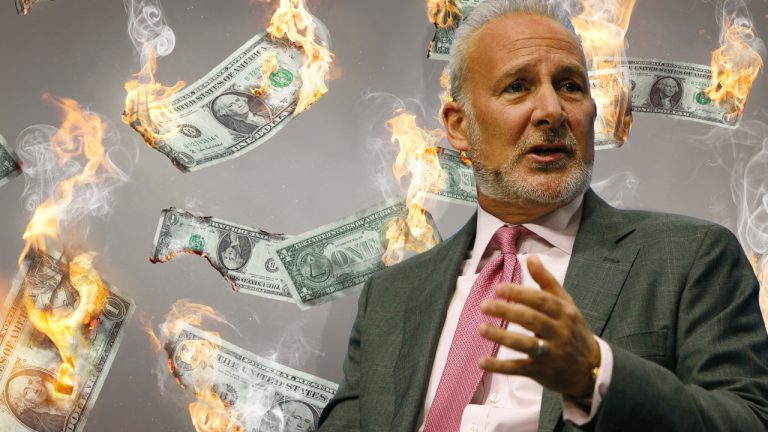 The economist and gold bug Peter Schiff usually has a lot to say, and this past week Schiff explained during an interview that he believes the U.S. will face a financial crisis worse than 2008’s ‘Great Recession.’ Schiff explains that the U.S. has a lot more debt than it did back then, and insists America’s economic downturn “is going to be a much bigger crisis when the defaults start.”

While Peter Schiff detailed that he would liquidate his Euro Pacific Bank, the economist sat down to discuss the American economy with the anchor and producer at Kitco News, David Lin. The day before he spoke with Lin, Schiff explained that even though inflation is seemingly cooling, he believes the trend will not last. “Paradoxically investors are selling dollars and buying gold on a lower than expected rise in July CPI, as they think the Fed will adopt a less aggressive policy,” Schiff said on Twitter. “They’re right to sell dollars and buy gold, but for the wrong reasons. The decline in inflation is only temporary.”

While speaking on the Kitco News broadcast, Schiff further explained in greater detail why he thinks America’s economic downturn will be more ugly than 2008’s economic decline. Schiff says if the Federal Reserve keeps raising interest rates, then a financial crisis is inevitable. “2008 was about bad debt,” the gold bug and economist stressed. “It was about people borrowing money and they couldn’t pay it back. The collateral for the loans was no good because it was real estate, and prices went down. Well, we have much more debt now than we had in 2008 … And so this is going to be a much bigger crisis when the defaults start.”

This time around, however, America’s financial giants won’t get bailed out, Schiff noted. The economist remarked:

When they fail, it’s going to be a lot worse, except with inflation too high and the Fed fighting inflation. There’s no TARP 2.0. All these banks are going to have to be allowed to fail.

Schiff Says US Inflation Is ‘Going to Be Here for Years and Years, and Probably the Remainder of This Decade’

Schiff’s comments follow the U.S. Bureau of Labor Statistics July Consumer Price Index (CPI) report, which reflected a year-over-year increase of 8.5%. Following the CPI report, U.S. president Joe Biden was criticized a great deal when he said the American economy had zero percent inflation in July. Biden’s commentary followed the U.S. government attempting to redefine the technical definition of the word “recession.” “If you believe the official CPI, then prices, that are already very high, did not get any higher during the month of July,” Schiff told the Kitco show host. Schiff added:

I don’t think that’s something to celebrate… It’s not like consumers actually got the relief of prices coming down. There’s no doubt in my mind that we will get a higher number than 9.1 percent. We are nowhere near done with this inflation problem. It is going to be here for years and years, and probably the remainder of this decade and then some.

Schiff’s commentary about the official CPI numbers follows the post published on schiffgold.com the same day, which claims the Bureau of Labor Statistics’ CPI calculation uses a government formula that understates the actual rise in prices. Additionally, statistics from shadowstats.com’s alternative inflation charts show inflation is much higher than official reports.

Metrics from the Truflation Index also indicate a much higher inflation rate than the CPI, with August 14 data at 9.41%. During Schiff’s interview with Lin, the economist said he expects a “massive financial crisis” and major issues with the U.S. dollar. When the dollar fails, he expects gold and silver values to skyrocket.

“The dollar has risen so far, in the early stages of this big inflation, because investors are delusional about the Fed’s ability to contain inflation and bring it back down to 2 percent,” Schiff concluded. “When they wake up to reality, that inflation is going to be way above 2 percent indefinitely, then the dollar is going to fall through the floor, and then gold and silver will go through the roof.”