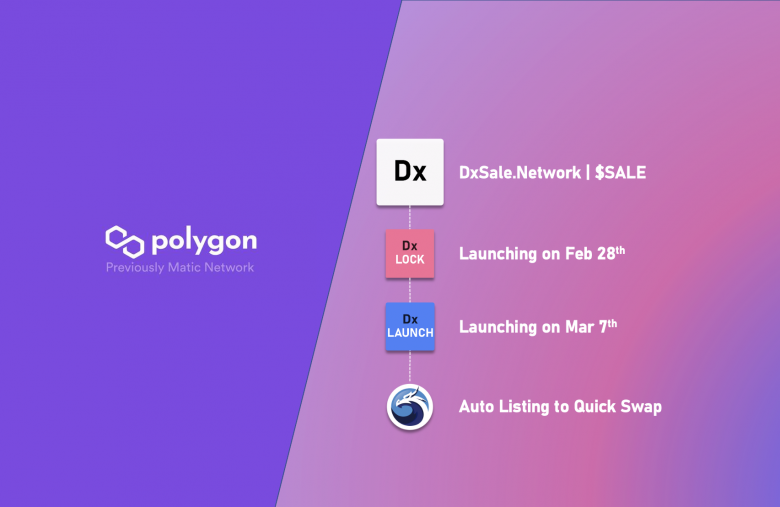 DxLaunch will allow users to seamlessly create and launch an IDO on the Polygon network and list directly on the QuickSwap DEX. Since the whole process is operated by the DAO, project creators will save time and effort  to focus on other strategies such as marketing and strategy. DxLaunch works as a decentralized IDO with logic to reduce and eliminate rugs at certain junctions of an IDO.

The team behind the decentralized network DxSale announced back in February that they were set to create integrated token platform services for the Polygon ecosystem that would allow its enthusiasts to create projects without worrying about technical difficulties. The first of these releases was the DxLock, which gave investors the peace of mind of knowing their presale funds are safely secured in DxSale lockers and will be joined now by the DxLaunch.

“With more and more projects launching on Polygon, DxSale will allow developers to raise funds to bring their ideas to life and take them to the next level. It’s great to have awesome development teams like DxSale make tools that will help the Polygon ecosystem at large”

The DxLock provides a standard for token locking in the Polygon ecosystem, being an easy way for both native and liquidity tokens to be locked and vested with added flexibility. The tool will also be interoperable with DxSale’s DxLaunch, in order to assist DeFi projects to raise capital and seamlessly list on QuickSwap, the next-gen layer-2 DEX on Polygon.

DxLock is a decentralized, cross-chain, token and liquidity locking system that is interoperable with other Dx applications. Its goal is to provide a connected user experience, which can save thousands of hours for developers and non-developers using the dApp through the DxSale DAO. DxLock is also already available on Binance Smart Chain.

All DxSuite apps are decentralized, the DAO is fully governed through the native SALE token. This will allow for quick swap creation, fundraising, locking, and listing that can be done as efficiently as possible using a single form.

Binance launchpad was the first launchpad to market that included successful projects such as PancakeSwap and Injective Protocol.

DxSale follows a recent trend of a number of launchpad projects offering crypto startups the opportunity to raise capital with Polkastarter, TrustSwap and DuckDAO proving to be popular choices.