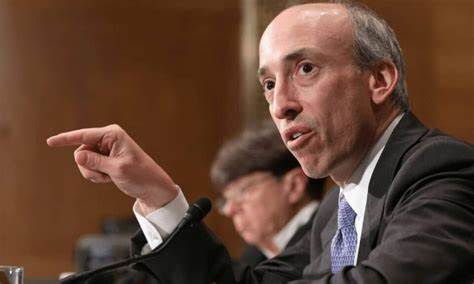 Gary Gensler – chairman of the Securities and Exchange Commission – recently explained his approval of a Bitcoin Futures ETF. He believes the ProShares ETF falls under current investor protections more easily than a spot-traded fund. However, many bitcoiners and other crypto supporters remain opposed to it.

Gensler aired his thoughts in a recent interview with CNBC, discussing the approval of the ProShares Bitcoin Strategy ETF. The interviewer asked why the chairman greenlighted a Bitcoin Futures ETF before a Bitcoin Spot ETF.

Gensler responded by contextualizing the approval within the SEC’s goals. He explained that while they welcome technological innovation, they need to bring projects into the investor protection perimeter.

“I think that we in the official sector should be technology neutral, but not policy neutral,” said the chairman.

He also stated that Bitcoin Futures have already been overseen by the Commodities and Futures Trading Commission for four years. The CFTC oversees the Chicago Mercantile Exchange (CME), which operates under the 1940 investment company act. It provides investors protection from commonplace market manipulation.

In ProShares’ post-effective prospectus released last week, the company filed their Bitcoin ETF under the 1940 act.

Gensler clarified that Bitcoin is still a highly speculative and volatile asset class but that the CFTC’s regulatory oversight is valued nevertheless.

Are Futures ETFs A Better Choice For Investors?

Some influential voices in the crypto community have been critical of the SEC for approving a Bitcoin Futures ETF first.

Raoul Pal – CEO of Global Macro Investor – criticized the product for taking massive slices from investors’ profits in administration fees. He called it a “suboptimal” solution compared to spot trading and one that hurts retail investors more than helps them.

Popular voices, including Willy Woo and Preston Pysh, have also been critical. They predicted that excessive fees associated with the ProShares ETF will create net sell pressure on BTC, lowering its price.

Shortly after the ProShares approval, Grayscale filed to turn their Bitcoin fund into a publicly traded Bitcoin spot ETF. There is yet no signal that it or another Bitcoin spot ETFs will be approved.