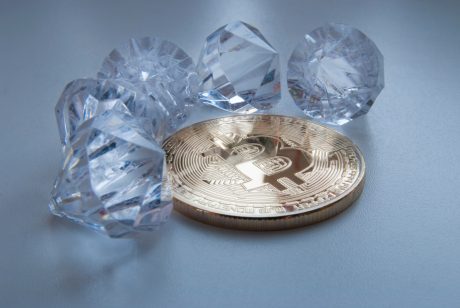 Sotheby’s has now set the world record for the most expensive piece of jewelry sold for crypto last Friday. The global auction house had announced the intended sale earlier in the year of the 101.38-carat rare diamond. Sotheby’s had announced that the auction would be held with crypto as the buying currency. Stating that interested parties could place their bids in either Bitcoin or Ether.

The announcement garnered much coverage as the crypto world anticipated this unprecedented event in cryptocurrencies history. The event was held in Hong Kong on Friday and the auction was a single-lot sale. Before the auction, Sotheby’s had estimated that the diamond would sell for between $10 to $15 million and it seems they were right.

The pear-shaped diamond, which is only the second to be allowed access to the public, ended up selling for $12.3 million. Right in the middle of the price estimates given by Sotheby’s.

Sotheby’s has been known to accept payments in crypto for art before. Earlier in May, the 300-year-old auction house had sold a Banksy artwork for $12.9 million. The global auction house has also been involved in the sale of NFTs. But nothing like this has ever been done before.

Sotheby’s had never accepted cryptocurrencies for a traditional sale like this and that is what makes it so interesting. And with the price tag on the diamond, Sotheby’s has effectively made a new world record.

According to the deputy chairman of Sotheby’s Jewelry in Asia, Sotheby’s wanted to allude to the crucial function of digital keys in the world of NFTs and crypto.

While the auction house had announced earlier that it would accept bids in either Bitcoin or Ether, it did not disclose what currency the diamond was eventually purchased in.

This auction shows that Sotheby’s has now added cryptocurrencies as a supported system of payment.

A New Generation Of Collectors

The acceptance of crypto by Sotheby’s shows the company’s aim towards appealing to a newer generation of collectors. More and more Millenials are favoring cryptos over traditional methods of payment.

The auction for the diamond has been marketed by explaining that this would be the most valuable item or piece of jewelry that has ever been purchased with cryptos.

The pear-shaped diamond known as “The Key 10138” ended up selling for 95.1 million Hong Kong dollars and the gemstone was sold to an anonymous private collector.