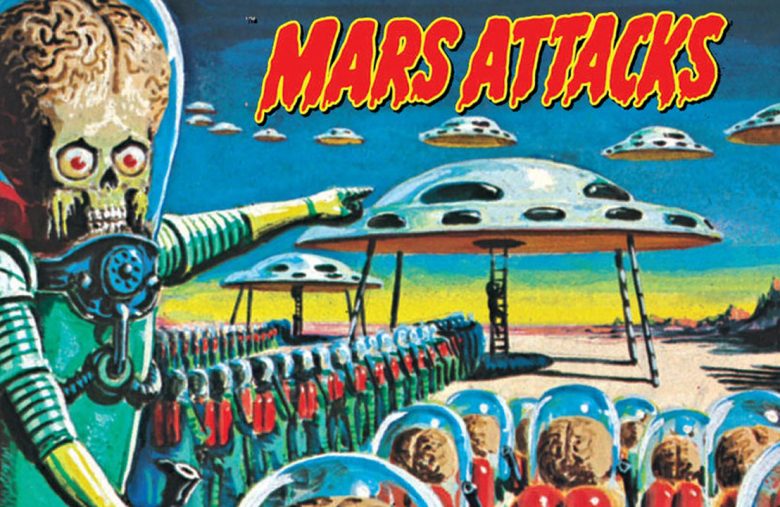 On Monday, the sports and entertainment collectibles giant Topps announced the launch of non-fungible tokens (NFTs) based on the firm’s classic science fiction-themed trading card series Mars Attacks. The limited-edition NFT collection will be hosted on the NFT platform Curio and will “mark Mars Attacks’ introduction into the blockchain.”

Following the influx of NFTs Topps has released, such as digital MLB trading cards, Garbage Pail Kids collectibles, Godzilla vs. Kong blockchain assets, and Bundesliga NFTs, the company has announced the first Mars Attacks NFT collectibles. Mars Attacks is a series of science fiction-themed trading cards Topps published in 1962. The cards were drawn by Norman Saunders and Wally Wood and they essentially tell a story about Martians who invade earth, but aliens are also ruled by a tyrannical government.

The cards grew very popular during the Cold War and some cards can get around $3,500 at auction according to psacard.com statistics. The card series distributed by Topps became well known in American culture and inspired a Tim Burton film called “Mars Attacks!” in 1996. Now Topps has announced that the first Mars Attacks NFTs have been launched via the NFT marketplace platform Curio.

“Topps is thrilled to partner with Curio on bringing the Mars Attacks world into NFTs,” Tobin Lent, the VP, and global general manager of Topps Digital Sports and Entertainment said in a statement sent to Bitcoin.com News. “The new collection delivers excitement to passionate fans of the science-fiction trading card series by honoring its heritage. Topps remains committed to working with a range of partners as we explore and innovate in this exciting new space.”

According to the Mars Attacks NFT announcement, the NFTs will be sold in packs and have various odds per pack and a number of rarities as well. There will be 564 “Yellow” packs that cost $49 per pack of 11 cards, 500 “Red” packs that will set someone back $99 per pack of 25 cards, and 150 “Green” packs that give the owner the full set of 55 cards at $199 a pack.

Some of the cards will have redemption tickets that give away animated, gold, x-ray, and static bonus cards. There are 27,510 total cards in the entire Mars Attacks NFT collection which equates to about 500 full sets and ten redemption tickets.