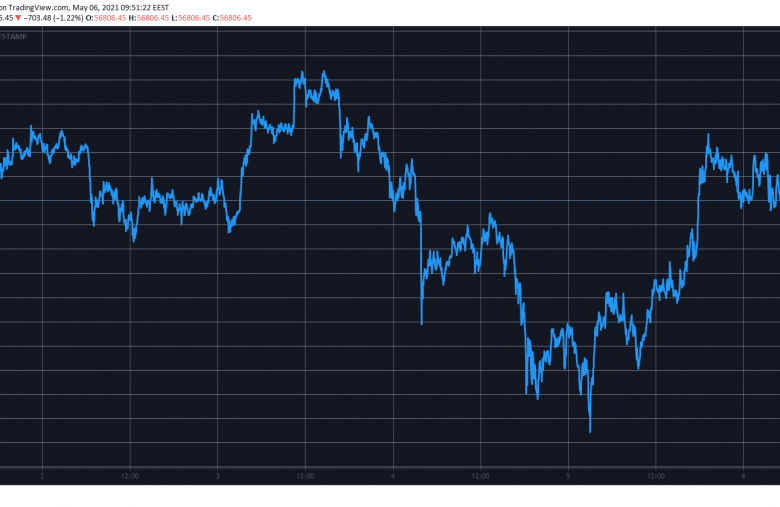 Following another dip to sub $54,000 levels, bitcoin has recovered some ground and added about $3,000 of value. Most altcoins have also pumped hard, including double-digit gains for Cardano and Ripple and a new ATH for Ethereum. In contrast, Dogecoin has retraced after the latest increases by about 10%.

The bulls took charge at that point and reversed the trend. BTC firstly increased above $55,000 before initiating another impressive leg up in the past several hours.

The latest price surge took bitcoin to an intraday high of just shy of $58,000. However, the primary crypto failed to overcome that particular level and has declined by about $1,000 since then.

The alternative coins also slumped slightly in the past few days but, similarly to their leader, have returned to charting gains. Ethereum, which stole the show lately, has marked yet another all-time high. This time, the second-largest cryptocurrency spiked above $3,560 for its latest record.

Cardano surged by more than 13% in the past 24 hours and came just inches away from painting a record of its own as well above $1.55. Bitcoin Cash is the most significant gainer from the top ten, following a 23% surge to above $1,300.

Uniswap, Chainlink, and Dogecoin, on the other hand, have retraced since yesterday. DOGE’s 10% decline has pushed the asset below $0.60.

Ultimately, the cumulative market capitalization of all cryptocurrency assets reached a record as well at nearly $2.4 trillion. The metric has expanded by more than $200 billion in just two days.