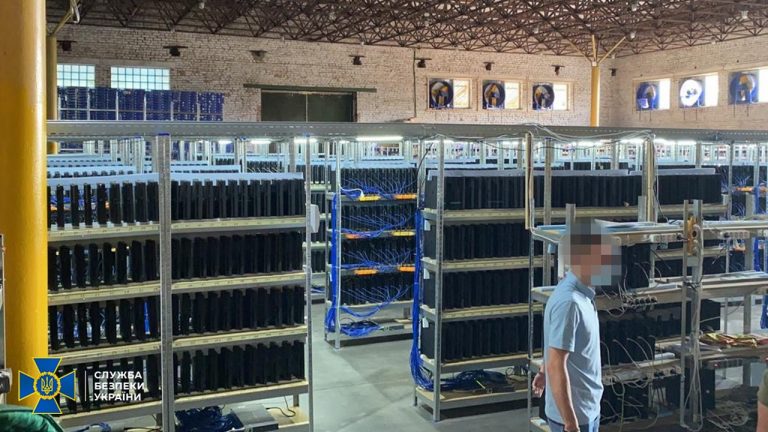 The Security Service of Ukraine (SBU) has located a massive coin minting facility that was illegally connected to the power grid in Vinnytsia. Law enforcement officials claim it’s the largest underground crypto mining farm they have found so far.

Ukraine’s main law enforcement authority, SBU, announced this week it exposed a large-scale electricity theft in the city of Vinnytsia, in west-central Ukraine. The stolen power was used to mint digital coins in what officials described as the country’s largest illegal crypto farm uncovered to this day.

The mining facility was set up by residents of Vinnytsia and the capital Kyiv in a former warehouse of JSC Vinnytsiaoblenerho, the agency said in a press release published on its website. They were able to conceal the theft from the distribution company using electricity meters that did not show the true energy consumption.

During the searches at the crypto farm and its operators’ residences, law enforcement seized almost 5,000 units of mining hardware, including 3,800 game consoles, over 500 video cards, and 50 processors. Agents confiscated documentation on electricity consumption as well as notebooks, phones, and flash drives, the announcement detailed.

The operation has been carried out by the SBU Department for Counterintelligence Protection of State Economic Interests together with the regional SBU Office in Vinnytsia and the Main National Police Investigation Department, under the supervision of Ukraine’s Prosecutor General’s Office.

Illegal Mining Farm in Vinnytsia Steals up to $250,000 of Electricity

Preliminary estimates released by Ukrainian authorities suggest the illegal mining operation is responsible for losses of electricity in the range of 5 to 7 million hryvnia, or between approximately $183,000 and $256,000, at the time of writing. The excessive consumption could have caused power surges and outages in the surrounding areas, officials added.

The SBU has initiated criminal proceedings for unauthorized use of electricity. Investigators are now working to identify all people behind the illegal crypto mining activities and trying to verify if JSC Vinnytsiaoblenerho employees are also involved.

The news from Vinnytsia comes after last week’s Ukrainian law enforcement shut down of an illegal mining farm in Chernihiv Oblast. The facility was powered by stolen electricity from the local electrical network. During a raid of rented warehouses, authorities seized 150 mining rigs that had burned energy for $110,000. In early June, the SBU uncovered a crypto farm with 350 mining rigs that were illegally connected to the power grid in Dnipropetrovsk Oblast and had used over $70,000 worth of electricity.