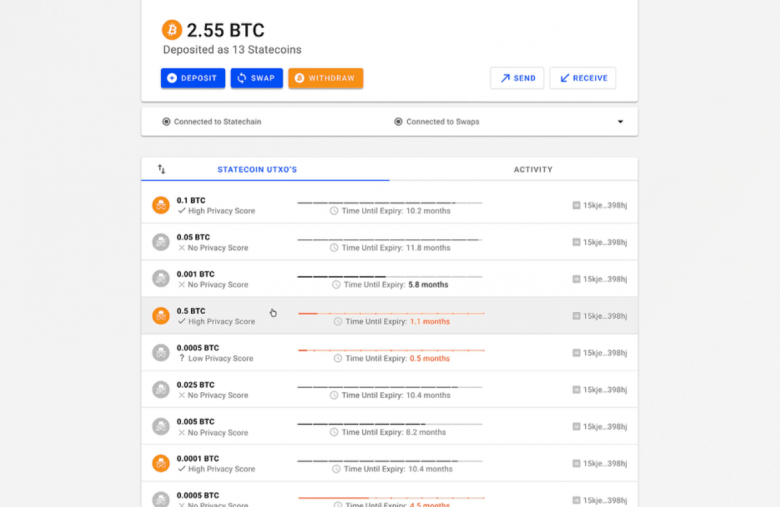 This wallet uses statechains to increase the improve scalability and privacy of Bitcoin transactions.

It is commonly believed that Bitcoin is one of the most private methods to send money and that payments are concealed somewhere in the blockchain. The fact is that using Bitcoin to make a payment is the most visible method to do so. Unlike a traditional bank, where your data is private, every Bitcoin transaction is recorded in the blockchain, a public ledger.

Mercury Wallet is one of the most recent Bitcoin wallets. It employs the notion of statechains and is based on the new Bitcoin layer-2 scaling technology.

As a result, the wallet may accept BTC deposits (UTXOs) without incurring any transaction fees. Because the monies are safely moved between owners without the need for an on-chain transaction.

As a consequence, as the owner, you will be able to quickly transfer complete custody of a Bitcoin amount to anybody. This improves privacy and eliminates miner costs.

Mercury wallet makes use of the unspent transaction output (UTXO) model, which is the underlying item that establishes value and ownership in a cryptocurrency like Bitcoin. A transaction ID, or TxID, and an output index number, or n, are used to identify the UTXO.

The wallet also employs a new technology known as statechains, a Layer 2 scaling solution for Bitcoin. Statechains are cryptographic frameworks made up of a series of digital signatures that pass ownership of a statecoin from one owner to the next. Statechains, like the blockchain, cannot be modified or altered, and it serves as evidence that the statecoin has not been used twice.

Statechains as a Layer 2 alternative scaling solution for Bitcoin

The primary goal of statechains is scalability. Users may use the Mercury Wallet to access this layer. Users may create statechains and conduct statechain transactions here.

Let’s take a closer look at statechains, the architecture that allows for these new private transactions. The amount of space available for Bitcoin transactions on the blockchain is quite restricted. If bitcoin enthusiasts want digital money to be available to as many people as possible, they must find a way to circumvent this restriction.

The Lightning network is the most widely used technique for scaling Bitcoin transactions at the moment. Lightning allows users to perform safe transactions without using any block space, resulting in quicker and cheaper transactions. Statechains are equivalent in this regard.

Statechains, like the Lightning network, rely on multi-signature transactions, which need many users to sign off on a transaction before it can be performed. In the case of statechains, two out of every two private keys must sign off. The user has one key, while the statechain provider has another.

To transfer cash, the user just transmits the receiver the private key. Sending your private key to someone is almost always a formula for having all of your money stolen. However, the statechain provider is intended to have the user’s back and prevent this from happening.

Users of the Statechain don’t have to worry about routing or liquidity difficulties as Lightning users do. The private key is easily transferred to another owner using statechains.

Unlike Lightning, there’s no requirement for a payment to go across a network, therefore there’s no chance of the transaction failing if one of the network’s hops is short on cash. Although clever new technologies have sprung up in the hopes of making this issue more bearable, liquidity is perhaps the biggest difficulty Lightning users face today. Direct statechain transactions are therefore preferable for bigger payments when routing might be difficult.

You can utilize swapping to increase your privacy since the wallet allows you to swap statecoins with other anonymous users using a blinded swap mechanism. To swap with other Mercury users, you must first confirm that they wish to trade the same amount of Bitcoin as you. Mercury has devised the concept of a state coin to address this issue. Like an actual coin or note, it stores an exact amount of money.

All you have to do is join a swap group via the Mercury swap conductor for the mercury wallet to automatically perform swaps with other anonymous users. In addition, the Mercury wallet provides information on the privacy status of each statecoin stored in the wallet.

To join a swap group, go to the wallet’s dashboard and click on the Swap button, then Join Group to swap statecoins with other Mercury wallet users.

Another method is to click auto swap on the coin and this will continually keep entering the coin in swaps until either you leave the wallet or you click Leave Group.

Mercury wallet uses a very straightforward mechanism to transfer statecoins from one owner to another. The statecoin receiver first creates a statecoin address using a Bech32 encoded public key with a SC prefix.

The sender must input the address into their wallet, which then works with the Mercury server to create an encrypted transfer message.

Also updated is the private key sharing. As a result, signing legitimate transactions with the server is limited to the receiver’s new private key share. The former owner’s private keys are also rendered useless.

Mercury Wallet uses a novel technology to scale Bitcoin transactions whilst also increasing privacy for its users. Off-chain transactions and secure private key swaps are some of the features that really make this wallet stand out.