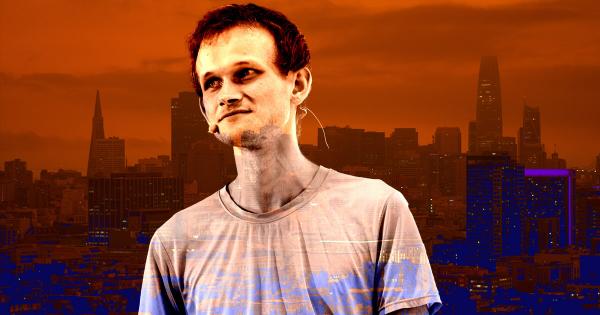 Vitalik Buterin talked about his worries during the 80 minute interview he gave to TIME Magazine after ETHDenver.

ETHDenver, one of the beloved crypto conferences in the world, took place this year between February 11 and March 21. The conference is the main developer-focused event of the year. It provides many opportunities to learn about new Blockchain innovations in addition to happy hours, open bars and after-parties.

Ethereum’s founder Vitalik Buterin was naturally the star of the whole conference. Even though he didn’t participate in the after-parties as he doesn’t drink and feels uncomfortable in crowds, Butlerin took every opportunity to share his thoughts on the crypto industry and the future of Ethereum.

On the last day of ETHDenver, Time Magazine held an 80 minute-long interview with Buterin where he shared his concerns about crypto’s future.

“Crypto itself has a lot of dystopian potential if implemented wrong,” said Buterin, referring to mining’s heavy share in pollution, crypto’s utilization as a vehicle for tax evasion and money laundering, as well as providing a platform for unthinkable scams. Most of his worries derive from reality going in a direction opposite to Buterin’s visions.

Ethereum as a platform for experimentation

Buterin wishes Ethereum to transform into a launchpad for social experimentation in the future. He wants the platform to host trials for fairer voting systems, urban planning, a system for universal basic income and similar public projects. With such projects, Buterin desires Ethereum to balance the power of authoritarian governments and Silicon Walley’s dominance on our digital lives.

Buterin has always been very careful with the centralization issue. This went as far as not putting himself out there as the “founder” of Ethereum because he worried about influencing the community. So he tried to keep the public appearances as minimum as possible.

However, he also acknowledges that his future vision on Ethereum could be quickly taken over by the greedy. So, he reluctantly positions himself in a more extensive public role to help nudge Ethereum’s future in the right direction. He says:

“If we don’t exercise our voice, the only things that get built are the things that are immediately profitable. And those are often far from what’s actually the best for the world.”

Despite his importance to the Ethereum network, he still can’t create the push he desires. That is because it was no one but himself who designed Ethereum to be completely decentralized. Buterin rejects the idea of anyone holding unilateral power over Ethereum, including himself.

That’s why he cannot go beyond offering mere suggestions through blog posts, interviews, speeches and conducting research. However, it is hard to say his methods are taking its effects on the community. He feels as if his voice is not heard. He expresses his worries by saying:

“I’ve been yelling a lot, and sometimes that yelling does feel like howling into the wind.”

Another thing Buterin worries about, which drives the community in the opposite direction of his vision, is the distraction overexpansion of wealth creates. He comments on the exponential growth of the market and says:

“The biggest divide was definitely that a lot of these people cared about making money. For me, that was totally not my goal. There definitely are lots of people that are just buying yachts and Lambos.”

Buterin refers to Lamborghini’s luxury sports car’s emergence as a symbol of success in the crypto space.

People who received impressive returns to their investors publicly spent their crypto on Lamborghini’s to prove the credibility of both the crypto space and their crypto-savvy. This took roots within the crypto community so well that the expression “When Lambo?” made its way to the crypto dictionary.

Buterin thinks that this overexpansion and shameless displays of wealth creates destruction for the community. It drives them to follow the profit rather than what the crypto space can become.

NFT is a gamble

When talking about the overexpansion of wealth, Buterin also touched upon the subject of NFTs. He mentioned that NFTs also became symbols of wealth and behave as high-level gambling. Referring to the Bored Ape Yacht Club NFTs, he said:

“The peril is you have these $3 million monkeys and it becomes a different kind of gambling.”

Buterin didn’t predict the rise of NFTs. They undoubtedly contributed to the growth of the Ethereum network and the price of Ether. However, they also overwhelmed the network due to their volume, which resulted in a sharp increase in gas fees. More importantly, they nudge the growth of Ethereum further than Buterin’s visions.

Buterin also acknowledged the community’s frustration about the high gas fees in the Ethereum network. He sided with the community in their frustration and said it needed to be fixed as soon as possible. He said:

“With fees being the way they are today it really gets to the point where the financial derivatives and the gambley stuff start pricing out some of the cool stuff.”

It seems like Buterin accepted that the community is pursuing fast profit at the moment. However, he realizes that if the fees are not lowered soon, the community will move to other options to pursue their gain. If that happens, Buterin won’t even be able to nudge the network towards his visions because no one will be using it.

The Russian invasion of Ukraine

Buterin also commented on the latest news about the Russian invasion of Ukraine and crypto’s role in the matter. Coming from a Russian-Ukrainian heritage, Buterin also took action by channelling hundreds of thousands of dollars in grants towards helping efforts to Ukraine.

Acknowledging the positive effect of the war on crypto, Buterin said:

“One silver lining of the situation in the last three weeks is that it has reminded a lot of people in the crypto space that ultimately the goal of crypto is not to play games with million-dollar pictures of monkeys, it’s to do things that accomplish meaningful effects in the real world.”

It seems though the war positioned crypto into a place that aligns with Buterik’s vision for the future of Ethereum. Donations to aid Ukraine was able to be collected fast, without a high cost and quickly from all around the world. A perfect image of worldwide collaboration and unison fits Buterin’s aspirations.