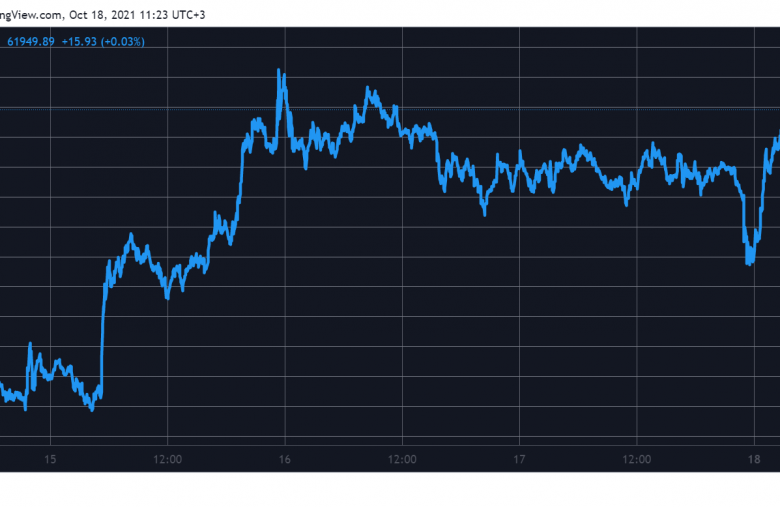 Bitcoin came less than 4% away from a new all-time high again, as the anticipation for a BTC ETF in the States rises.

After the massive price drops below $59,000, bitcoin went on a roll again and added nearly $4,000 of value in hours. Most altcoins have stood behind once more, leading to another increase of BTC’s dominance.

The weekend started on a high note following the reports that the first-ever Bitcoin futures ETF could go live in the US this week. The primary cryptocurrency’s price went to a six-month high at nearly $63,000 as a result.

The landscape calmed on late Saturday and early Sunday before the bears came to play again and pushed the asset south. In a matter of hours, bitcoin lost several thousand dollars and dumped to below $59,000.

After this substantial correction, though, the situation changed once more. BTC started to increase in value rapidly, added nearly $4,000, and neared $63,000 once again. After coming just 3% away from its ATH of $65,000, bitcoin has retraced slightly now and stands around $62,000.

Its market capitalization has increased above $1.150 trillion, while the dominance over the altcoins sits at 47% as most have failed to follow it north.

It has been rather common lately that most alternative coins have been unable to display the same gains as their leader. Ethereum took a swing at $4,000 during the weekend but failed early and has now retraced to just over $3,800.

Cardano, Ripple, Solana, Uniswap, Litecoin, and Avalanche are also slightly in the red. In contrast, Binance Coin, Polkadot, and Dogecoin have charted minor gains on a 24-hour scale.

Stacks has seen the most impressive price increase from the top 100 coins with a 22% surge. As a result, STX now trades above $2.5. Zcash and Shiba Inu follow with similar jumps of 8%.

The cryptocurrency market cap neared $2.5 trillion once again, after a $30 billion increase in a day.