After Two Red Weeks, Bitcoin Is Nearly As Oversold As In March 2020 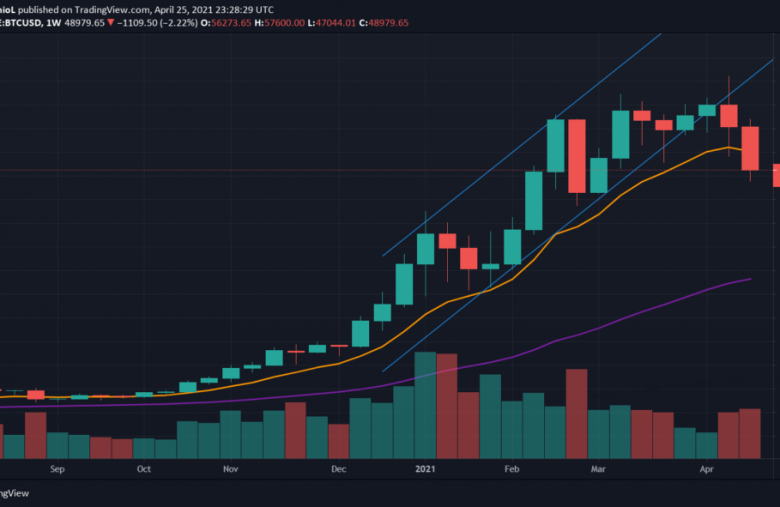 Bitcoin closed the week with the second-largest red candle in its entire history, testing lows near the $47k price zone following an ATH of $64K recorded in the previous week.

Overall, this was a tough week for markets across the board. From stocks to cryptocurrencies, traders experienced an episode of collective panic marked by the rumor that Joe Biden would be preparing a bill to increase capital gains taxes by almost 100% for all those generating more than $1 million in profits.

The news caused a widespread drop in the most important financial indices in the United States and other countries. And cryptocurrencies had an even worse reaction, with Bitcoin confirming its downtrend after breaking the support of a channel initiated in late 2020.

Bitcoin lost just over 5% in the last 24 hours, and 13% over the previous 7 days. With near $8.000 lost, this would be the most significant gross price decrease in history, even though it has seen worst declines in terms of price proportions. To put things in context, a $10 drop when Bitcoin was traded at $100 was proportionally worse than a $1000 drop when Bitcoin was priced at $60,000.

Indicators show that traders have not yet recovered from the panic episode of the previous days. Bitcoin has not been this oversold since mid-March last year, when fears of a widespread crisis due to the coronavirus pandemic drove markets to the subsoil.

The RSI is an metric that signals whether there is a balance between buyers and sellers. It is currently in the order of 25 points out of 100. That is, there are 25 people placing buy orders vs. 75 people placing sell orders for the same value.

This means that traders are currently looking to exit their positions to increase their holdings of fiat, commodities, or perhaps even altcoins.

A similar sentiment is shown by the Crypto Fear & Greed Index, which is at its lowest level in a year, indicating that investors’ fear of losing money with Bitcoin hasn’t been this strong since the March 2020 crash.

However, a low RSI is -generally- a bullish sign. In theory, markets tend to achieve equilibrium after such periods of euphoria with a correction to the contrary.