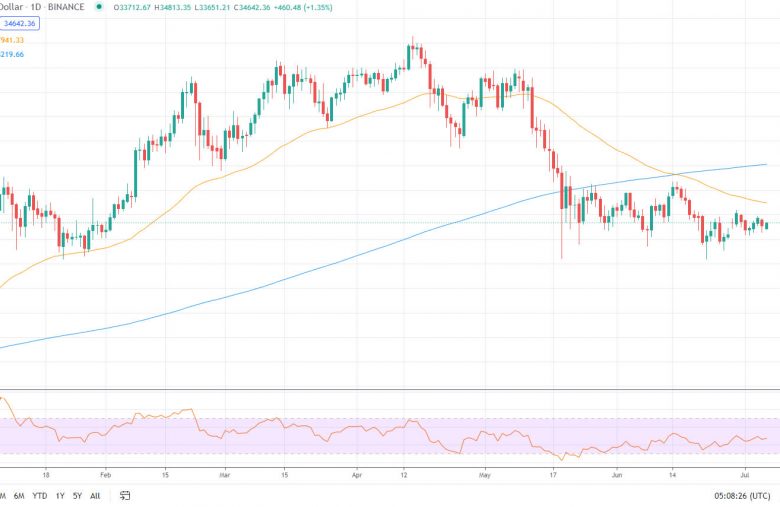 In a tweet on July 6, the analyst stated that Bitcoin’s inability to make new highs in more than 80 days is “confirmation that the bull market is over.”

“Never in any bull market in Bitcoin’s entire history have we corrected for this long, then made new highs in the same year.”

It was pointed out by one respondent that there was a 7-month window during the 2013 bull run where BTC had a steep crash of about 70-80% from its previous high. This was before it made a final run to top $1,000 at the peak of that cycle.

Others observed that this cycle is different from previous ones due to all the additional factors in play.

Bitcoin has now been consolidating for more than six weeks which means a bigger move is nearing. Zooming out on the charts suggests that ‘Mr. Whale’ could be correct in his assumption.

There have been crackdowns on cryptocurrencies and bank fuelled FUD over the past couple of cycles, but there has never been an outright mining ban in the country that had over 65% of the hash power.

Many industry observers have seen this as a positive thing overall as it diversifies hash rates from the authoritarian regime in China. Mining operations can migrate to more crypto-friendly jurisdictions and use renewable energy which is another positive aspect.

In its weekly report, on-chain analytics provider Glassnode revealed that the Bitcoin network has been adjusting to the hash rate decline as miners in China power down their rigs.

“As volatility seeps out of the Bitcoin price, it has notably ramped up in the mining industry, as the Bitcoin network adjusts to an incredible decline in hash-power during the Great Migration.”

Bitcoin hashrate continues to slide and is currently 76.7 EH/s according to Bitinfocharts. This has been a drop of 55% from its mid-May ATH of 171 EH/s.

BTC itself has made 1.4% on the day to trade at $34,750 at the time of press according to CoinGecko. However, the overall trend remains downwards as the asset continues to make lower highs and lower lows.

To break this, Bitcoin would need to crack resistance at $37K in the short term. Failure to do so could see it plunge below support at $32K.