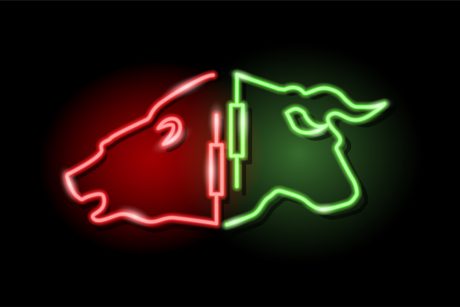 The rug was just pulled across crypto, wiping out gains from the past week and then some. Bitcoin is now back at prices from March, and is at risk of falling deeper into a bear phase according to a fractal found in the recent price action.

What’s notable, is that the same fractal suggests that the bull market isn’t yet over, despite the change to a bear trend for the time being. Here’s what the trajectory of Bitcoin could look like based on Elliott Wave Theory, the LMACD, and the recent reversal across crypto.

Bitcoin Price Plummets Back Below $50,000, Matches Breakdown From 2019

A fractal is a repeating pattern that is found all throughout nature, or in this case, finance. On the price charts of coins, stocks, commodities and more, patterns can repeat again and again in a similar manner.

Each pattern can even result in similar price action upon completion. For example, Black Thursday matched the second plunge of the 2014-2015 bear market bottom.

Is this fractal from 2019 repeating once again? | Source: BTCUSD on TradingView.com

The recent price action in Bitcoin, almost perfectly matches the first major correction since the bull market began – back in June 2019. Both times the logarithmic MACD crossed bearish, and the candle structure on high timeframes is strikingly similar.

If the fractal is accurate and produces similar results, Bitcoin could spend the next six months or so in a downtrend. The bear phase could reach a similar scope and severity as the 2019 peak, considering that the recent price parabola has been broken.

A bear phase is more than likely to now follow, but that doesn’t necessarily mean the bull market is over.

For those unfamiliar with Elliott Wave Theory, the study focuses on market impulses based on extreme changes in sentiment.

Within each major “motive wave” are typically five impulse waves. If the primary wave is up, and Bitcoin has been in “always up” territory  since its inception, then odd numbers waves are also up, with even waves moving against the primary trend.

Early 2019 would have acted as wave one of five, with the downtrend of wave two concluding on Black Thursday. That bounce began wave three, in which according to Elliott Wave characteristics, is “undeniable.”

Wave four is a bit more tricky. It can sure feel like the top is in, but if wave three just ended, Bitcoin bulls’ best hope is that wave four is next.

Wave four according to the practice, won’t ever retrace back into wave one’s path. This means that Bitcoin price will never again go below $13,800.

If it does, it could suggest a failure, and the top cryptocurrency could be in serious trouble.