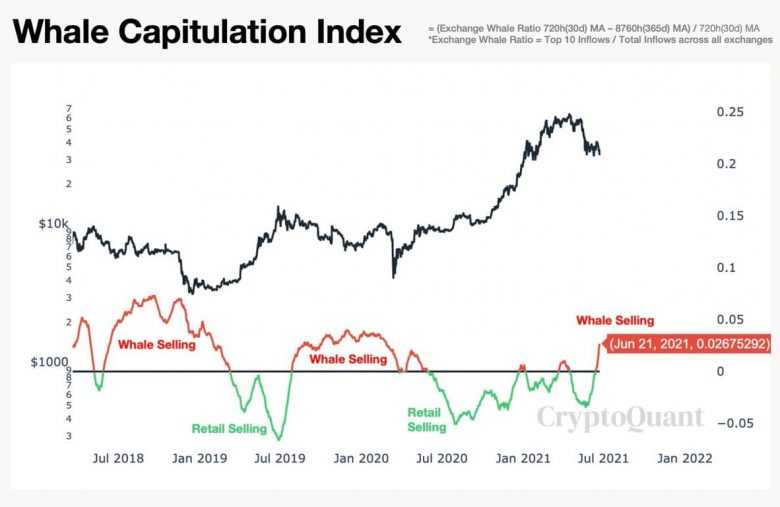 This report marks the third consecutive seven-day period to see a negative balance on the flow of institutional crypto funds monitored by the firm for the first time since the bear market of 2018.

Monday’s report likely offers another signal of bearish sentiments in the crypto space, at least in the short term. Beginning in February 2018, CoinShares recorded seven consecutive weeks of outflows from institutional crypto funds.

Bitcoin accounted for most of the outflows recorded this past week at $89 million, with the BTC total outflow now over $487 million since the start of the year. According to CoinShares, this figure amounts to about 1.6% of the total assets under management of the funds captured in the analysis.

Ether (ETH), on the other hand, only saw minimal outflows, totaling $1.9 million to bring the 2021 ETH outflow to about $14.6 million or 0.14% of the total AUM of these funds. Despite seeing only minor outbound movement, ETH weekly trading volume by institutional investors is down about 80% since the high point reached back in May.

I hate to say this, but it seems like the $BTC bear market confirmed.

Too many whales are sending $BTC to exchanges. https://t.co/DgmLukP4NU pic.twitter.com/AWJ8oVSUkQ

Dominance on the Rise but BTC Needs Higher Highs

While Bitcoin is down over 50% since reaching a new all-time high above $64,000 back in April, its price decline has not been as massive as some other major altcoins. After declining to a two-year low below 40% amid altseason back in early May, the Bitcoin dominance has bucked the trend to rise slightly and is now at 45% as of the time of writing.

However, given Bitcoin’s stated ability to lead wholesale market recoveries, a slight increase in dominance is not enough to kick-start another crypto market uptrend as it needs to attain higher highs in terms of short-term price action.

Bitcoin plummeted to $32,000 earlier on Monday amid negative news out of China about a ban on financial institutions servicing crypto trading platforms. These price struggles have seen BTC’s year-to-date performance shrink to a little over 10%.