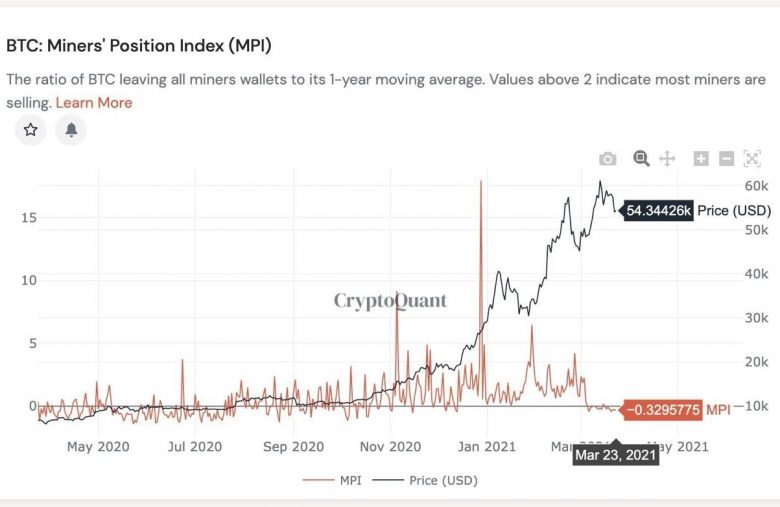 As bitcoin’s price added roughly $4,000 in a day, on-chain data shows that miners have enhanced their holding mentality and stopped disposing of their coins.

At the same time, institutional investors continue accumulating large portions of BTC after another sizeable withdrawal from Coinbase worth over $800 billion.

Miners, also known as the backbone of the Bitcoin network, receive coins as rewards for the work they put in to maintain BTC’s blockchain. Their behavior and approach towards the newly-acquired tokens could have some impact on the asset price, especially if they decide to sell in bulk.

In February alone, there were two spikes of known miners’ wallets transferring massive quantities to exchanges. After each, the cryptocurrency’s price dumped between $5,000 and $13,000 in a matter of days.

Since those events, though, it seems that miners have changed their attitude towards bitcoin. Data provided by the analytics resource CryptoQuant says that the Miners’ Position Index (MPI) has plummeted in recent weeks into negative territory.

The metric shows the ratio of bitcoins leaving the known miners’ wallets to its 1-year moving average. According to the company, if the value goes above two, it suggests that most miners are currently selling.

While miners seem to be in a HODLing mood, institutional investors have only enhanced their appetite towards the primary cryptocurrency.

Further data from the analytics company shows that large investors have made another sizeable withdrawal from the largest US-based crypto exchange Coinbase. This time, they have transferred 14,666 bitcoins from Coinbase’s wallets to custody addresses.

To put this amount into a USD perspective, it’s roughly $800 billion per yesterday’s prices – when the withdrawal was initiated.

CryptoQuant’s CEO has repeatedly outlined the significant impact of such events on BTC’s price. In the past, large withdrawals have resulted in somewhat immediate price increases.

However, it’s worth noting that today’s price surge could be attributed to news coming from Elon Musk’s Tesla as well. As reported earlier, the CEO of the electric vehicle giant said that his company will start receiving BTC payments and will retain them in bitcoin instead of converting them to fiat.