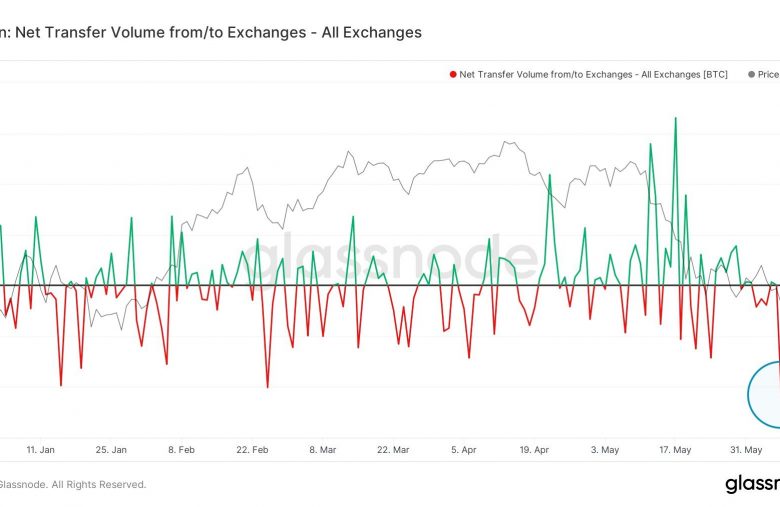 With the latest price fluctuations with BTC’s price, it’s worth reviewing how different investors are interacting with their holdings. From one side, centralized exchanges saw the largest daily withdrawal in the year, but, on the other, Bitcoin-related products saw the most significant outflows worth $141 million.

By outlining data from Glassnode, Lex Moskovski, the Chief Investment Officer at Moskovski Capital, showed the recent spike in withdrawals from centralized exchanges.

He called it the “biggest net-outflow of the year” as the total number of bitcoins equaled 22,550. To put this considerable amount into a USD perspective – it’s roughly $750 million, even after the latest price crash.

As the graph above illustrates, similar significant withdrawals typically lead to price developments shortly after. For instance, following the two substantial outflows in January, BTC’s price started to appreciate. Something similar occurred in February in the previous largest withdrawal after bitcoin had dipped to $40,000.

But Now, The Bad News

Although the aforementioned withdrawals could be regarded as bullish developments, CoinShares’ latest report suggests that institutions might be cooling off towards BTC.

The company’s paper highlighted “the largest single week of outflows on record” from Bitcoin-related investment products.

“The negative sentiment was again focused on Bitcoin, which saw outflows totaling $141 million. The outflows represent 8.3% of the net inflows seen this year and remain minimal on relative terms to the outflows seen in early 2018.”

Thus, the trend continues following the negative sentiment that dominated May, when the primary cryptocurrency’s price slumped to a three-month low of $30,000.

A recent example from Ruffer Investment showed that institutions may indeed be less interested in investing in BTC now. The UK giant cashed its entire Bitcoin position and netted over $1.1 billion in just several months.

And, while some investors might be dropping BTC, they have shown continuous demand towards the second-largest digital asset.