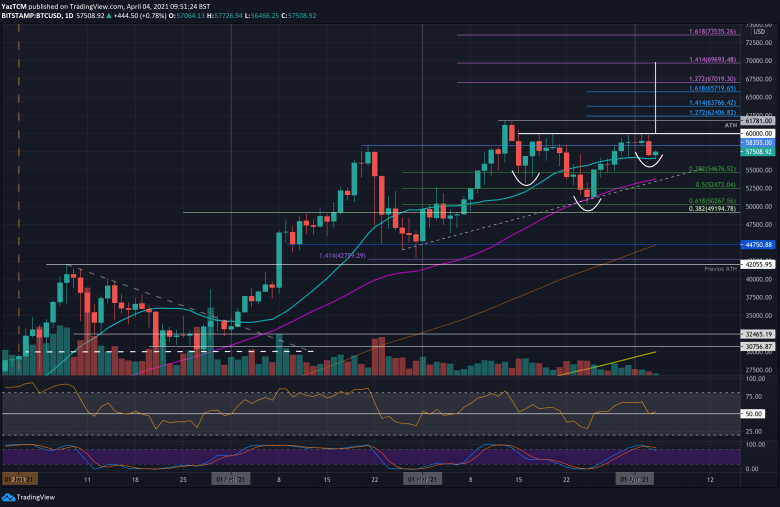 Let’s start with some good news: despite dropping by 2.7% today, Bitcoin’s price is still up by 3% over the past week, as of writing these lines.

A quick recap: the primary cryptocurrency started the month of April by attempting to push above the $60,000 level, this was the fourth attempt since March 18. Unfortunately, it got rejected once again, and over the past hours lost around $3500, reaching as low as $56.5k on Bitstamp.

There, it met short-term support at the .382 Fib. This support was further bolstered by the 20-day moving average line (and maintained on a 4-hour timeframe unless there will be last-minute surprises). This is the same supporting line Bitcoin bottomed at on Wednesday.

Two scenarios from here: the bullish one will be a fifth attempt to break the $60k line. In case of success, Bitcoin will complete an inverse head and shoulders with a target of $69k (the size of the pole).

On the other hand, Bitcoin will look to maintain the $54-56k range, which is full of demand. In case of a breakdown, the $50k will be at risk once again.

The daily RSI dropped from bullish momentum to the midline to indicate indecision within the market. If it continues beneath 50, the bearish momentum is likely to drive BTC beneath $56,400.