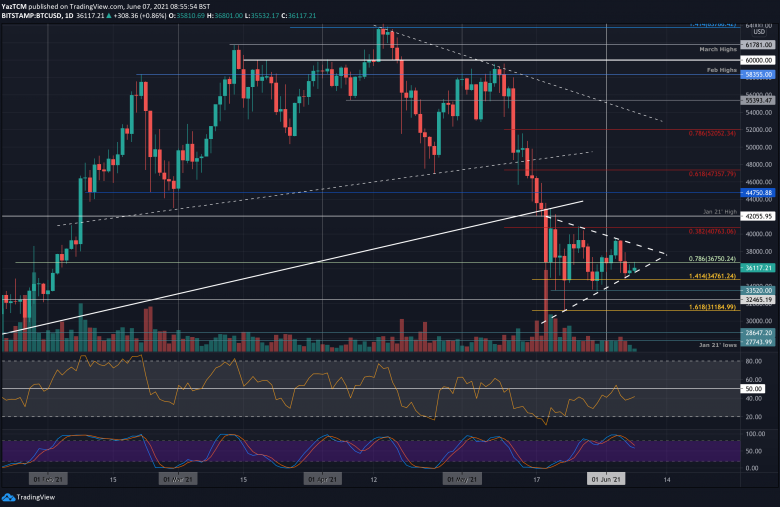 Bitcoin’s consolidation continues as it’s trading exactly where it was a week ago. It had made a push higher toward the end of last week but got heavily rejected by the $38-40k zone, where it met resistance at the upper boundary of a symmetrical triangle pattern (as shown below).

From there, BTC headed lower over the weekend, reaching $34,850 on Bitstamp, where it found support at the lower boundary of the same symmetrical triangle pattern. It has since bounced higher and it attempts to reclaim $36,000.

Looking at the short-term chart, bitcoin has penetrated above a short-term symmetrical triangle pattern last week and started to head higher inside an ascending price channel, which turned into a false breakout.

BTC is back beneath this price channel over the weekend but is battling to maintain itself above the longer-term symmetrical triangle. It has been in a phase of consolidation between $32,000 and $40,000 since the market capitulation seen in mid-May. It’s still unclear where BTC would head toward next, but the breakout direction would clarify this.

A breakout above the triangle should allow BTC to face one of the previous all-time highs which turned into solid resistance at $42k. Further above lies the $50,000 milestone.

On the other hand, a breakout below the triangle would see BTC heading toward $30,000, and potentially $27-28k next.

The apex is set for June 14th, and a breakout is likely to take place before it is reached – possibly this week.

The daily RSI remains in the weak bearish territory as the bears fail to sustain any momentum. Therefore, for a bullish breakout, the RSI must rise past the midline and climb higher to indicate that the bearish momentum is increasing within the market.