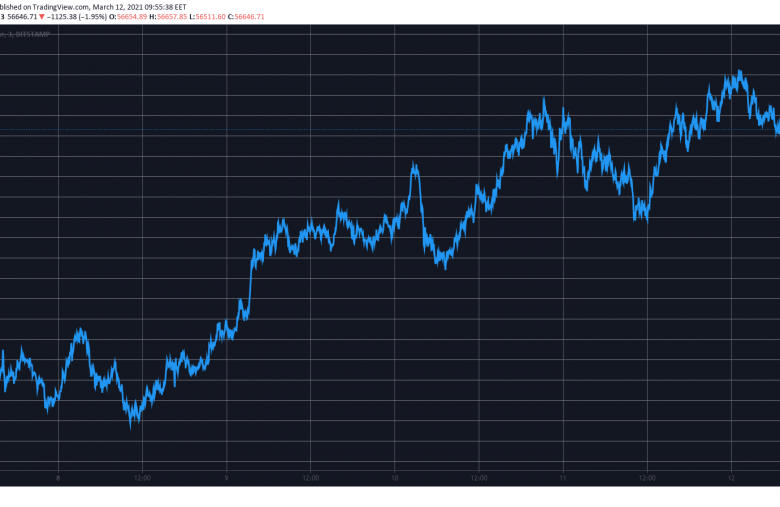 Bitcoin came even closer to reaching a new all-time high a few hours ago but failed, and the subsequent rejection drove the asset below $57,000. Most alternative coins have remained relatively calm on a 24-hour scale despite some severe volatility experienced in the past few days.

Bitcoin Came 0.43% Away from a Fresh ATH

It seems that last week’s price drops in which bitcoin dipped to $43,000 are long gone for the cryptocurrency. This week the asset has been on an impressive run that overcame several notable milestones.

However, one thing BTC has failed (so far) to do is break the all-time high record of $58,400 painted in mid-February. The asset came about 2% away a few days ago and even closer earlier today.

Upon reaching that point, though, the bears took control and drove the primary cryptocurrency south to its current level of roughly $56,500.

The technical indicators suggest that BTC’s first obstacle on its way towards uncharted territory is at $57,686. If conquered, the next resistance lies at $58,355.

Altcoins Calm After the Storm

Yesterday was a highly-volatile trading day for most of the altcoin market, but the situation seems calmer now. Ethereum spiked to $1,850 but has retraced since then and currently sits beneath $1,800.

Binance Coin went through a sudden surge when BNB reached a new 3-week high of $315. Similar to ETH, though, the asset retraced somewhat sharply and is now below $280.

On a 24-hour scale, Polkadot, Cardano, and Ripple have charted minor losses, while UNI (2%) and Litecoin (5%) have gained the most from the top ten.