Bitcoin Price Ready for Another Leg up According to On-Chain Metrics: Analyst 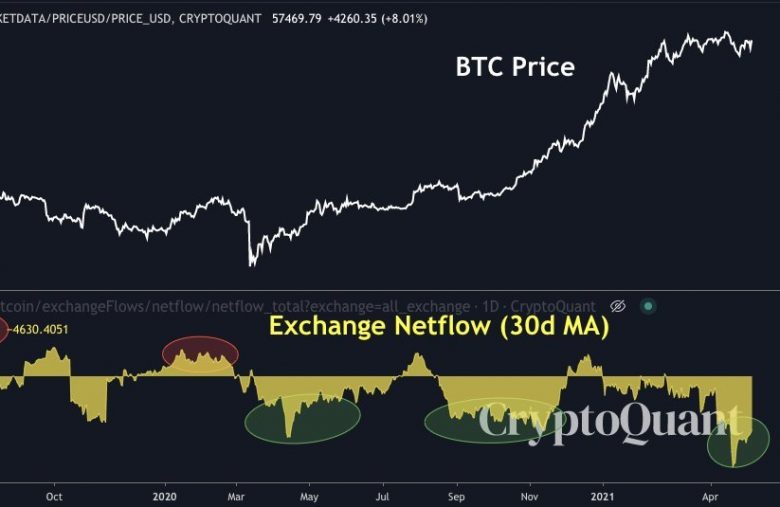 Bitcoin investors have withdrawn considerable quantities of their holdings from crypto exchanges, suggests on-chain data provided by CryptoQuant. The firm believes there’s a potential price uptick in the making as sell pressure has declined.

As with every tradeable asset, bitcoin’s price is formulated based on supply and demand. In bitcoin’s world, the amount of available supply on exchanges could impact the asset’s value as investors holding the coins can quickly dispose of theirs.

$BTC is ready to get another leg up.

A significant amount of Bitcoins has flowed out across all exchanges, weakening selling pressure.

Ki Young Ju outlined a “significant” amount of bitcoins that flew out of crypto exchanges in the last several days. Consequently, he predicted that the primary cryptocurrency is “ready to get another leg up.”

As the graph above demonstrates, the amount of BTC stored on trading venues indeed has a correlation with the asset’s price movements. In the middle of 2019, bitcoin fell in a matter of days from $14,000 to sub $9,000 as there were lots of coins on exchanges.

The opposite scenario has also transpired. In late 2020, hodlers started to withdraw substantial quantities of BTC coins, which coincided with the start of the current bull cycle.

Further data from the analytics company showed that Ethereum investors also have similar plans for their holdings. The firm indicated that the number of exchange outflows spiked in recent weeks.

Somewhat expectedly, the price of the second-largest cryptocurrency has been tearing up new records. Less than three weeks ago, ETH dabbled with $2,000, but it exploded since then to above $3,000 as reported. It didn’t stop there and continued upwards to its latest record registered earlier today at $3,560.

In Ethereum’s case, a large portion of the coins is locked in ETH 2.0 contracts. The number of new depositors and the total value locked frequently reaches new records as investors anticipate the network’s migration from proof of work consensus algorithm to proof of stake.