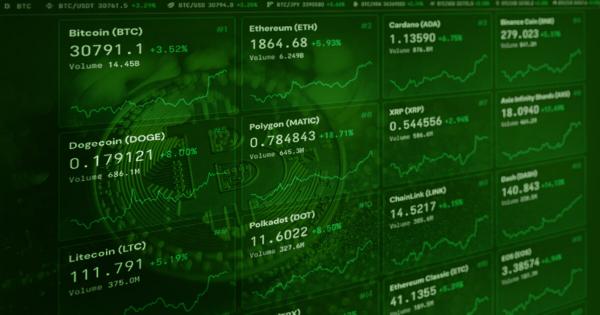 Bitcoin pumped over $1,000 this morning to reclaim the $30,000 level, after briefly dipping under $29,500 last night. Larger altcoins mirrored that move and pumped by high single-digit percentages as of press time, data from multiple tools shows.

The world’s largest cryptocurrency was dragged down this week against a rout in the global equity market—one that pundits peg to the ever-increasing COVID cases and mutants, while critics peg to that of high inflation in the Western countries.

It was, however, met with rejection at the $31,000 price level, and still trades below the 34-period moving average, suggesting the bearish trend isn’t ending yet.

For the above coins: Ethereum has a positive fundamental catalyst approaching in the form of the much-awaited EIP-1559—the protocol’s shift to a proof-of-stake consensus design—while Cardano’s steadily moving ahead with its own awaited smart contract implementation.

On the other hand, Solana, a high-speed blockchain whose investors include Sam Bankman-Fried, the billionaire owner of FTX, seemed to have pumped on the back of FTX’s $900 million record fundraise yesterday.

And the asset’s market cap has drastically fallen as a result: the Bitcoin network was valued well over $1.1 trillion in April but has since tumbled down by 45% to today’s $533 billion, a level was last seen in December 2020.