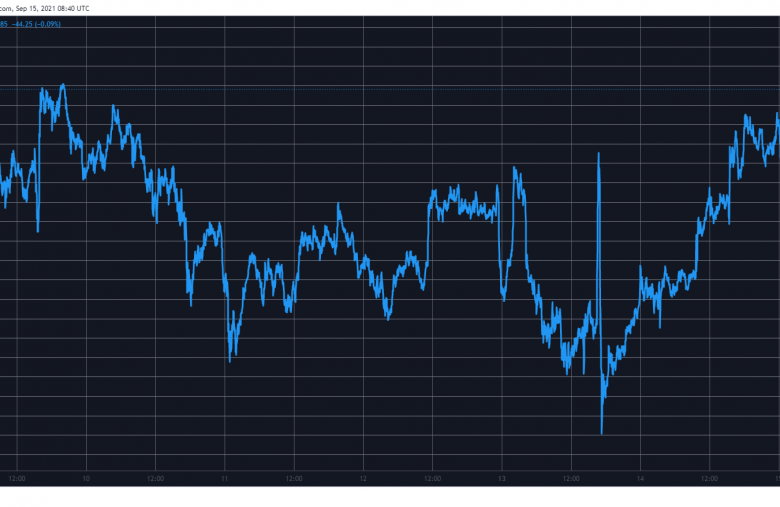 Bitcoin’s price has recovered most recent losses and spiked above $47,000 to tap a weekly high. Most altcoins are also in the green, including a 5% increase from Binance Coin. As a result, the cryptocurrency market cap has added roughly $150 billion in two days.

The past few days were highly volatile for the primary cryptocurrency. It all started after getting rejected at $46,500 on Monday, and the subsequent drop took it to $45,000 in minutes.

However, the situation intensified later on that day when news broke that the e-commerce giant Walmart had started to accept Litecoin payments for its products and services.

Bitcoin, and the rest of the market, exploded in value. BTC alone spiked from $44,600 to just shy of $47,000. However, the reports turned out to be fake, and the asset went down just as vigorously. In a matter of minutes, bitcoin plummeted to $43,400.

The bulls stepped up at this moment and started gradually pushing the cryptocurrency north. In the following two days, BTC has increased by nearly $4,000 and broke above $47,000 hours ago. Moreover, it went to a high of $47,500, which became the highest price tag since last week’s market correction.

As such, BTC’s market cap has neared $900 billion once more, while the dominance over the alts is still around 41.5%.

Most alternative coins have performed rather similarly to their leader lately, including the enhanced volatility on Monday. Ethereum dropped below $3,100 but has recovered most losses and currently sits just over $3,400.

Binance Coin is among the best performers today, with a 5% increase. Consequently, it trades around $425. Even more impressive gains come from Chainlink and Uniswap, both of which have surged by roughly 10%. LINK has reclaimed $30, while UNI sits above $25.

Minor increases come from Ripple, Polkadot, Dogecoin, Terra, and Litecoin. Solana is in the red today after issues with its network yesterday.

The cryptocurrency market cap has recovered just over $150 billion since the low two days ago and currently stands above $2.1 trillion.