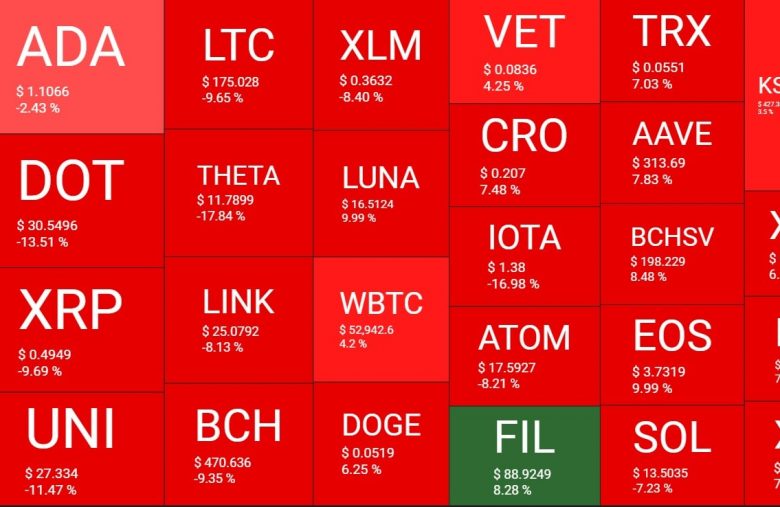 The market-wide correction that saw BTC plummet to $51,500 has harmed the alternative coins even worse. Ethereum dropped well below $1,600, while double-digit price declines are evident for numerous large-cap alts, including Polkadot and Uniswap.

After a few days of sideways trading, the altcoin market looked healthy yesterday with minor gains. Ethereum led the charge with an increase above $1,700. Moreover, the second-largest cryptocurrency went to a daily high of $1,740.

However, the situation has changed entirely in the past 24 hours. A sudden price drop evaporated $200 of ETH’s value, and the asset went to an intraday low of $1,550 a few hours ago. Despite recovering some ground since then, ETH is still below $1,600 and is over 6% down.

Ultimately, the cumulative market capitalization saw $150 billion wiped off in a day to a low of $1.620 trillion.

The situation for the primary cryptocurrency seemed to be going its way yesterday following news from Elon Musk’s Tesla that the giant will enable purchases with BTC and retain the coins. Almost instantaneously, the cryptocurrency jumped by a few thousand dollars and even topped $57,000.

The tables turned rather vigorously for bitcoin as it plummeted by more than $6,000 since then to an intraday low of $51,500 registered a few hours ago. Although BTC has bounced off and spiked to roughly $53,000, it’s still over 4% down on a 24-hour scale.

What’s perhaps even more damaging is the fact that bitcoin’s market capitalization dropped below the coveted $1 trillion and still sits beneath it.

According to Bybt data, the enhanced volatility has caused over $2 billion in liquidations across the entire market since yesterday. In the past 12 hours alone – approximately at the time when the market started dumping in value – the liquidations are more than $1.6 billion.