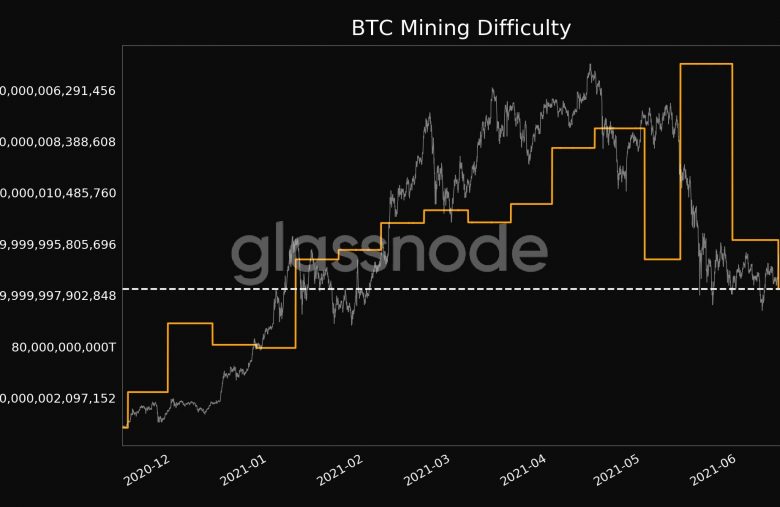 After the latest crackdown from China on Bitcoin mining and the declining hash rate, the mining difficulty has gone through another adjustment. As a result, the metric has dropped by 20% in less than a month to a 5-month low.

The world’s largest country by population has been reiterating its negative stance against the cryptocurrency industry for almost a decade. It did it once again in May, but this time it went a step further.

As previously reported, some of the regions responsible for a considerable amount of the BTC hashrate received official notices to halt any Bitcoin mining operations that may “pose a safety risk related to their electricity usage.”

Despite being the most advanced country in terms of Bitcoin hashrate for the last several years, China’s dominance is rapidly decreasing. Some reports suggest it’s down by about 10% in a month.

Instead, other countries, including such located in North America, are taking advantage by attracting miners through the abundance of renewable energy.

While China’s crackdown takes place and miners complete their relocation, the hashrate of the world’s largest blockchain suffers. The metric is down from its all-time high in May of over 180M TH/s to 136M TH/s – meaning a 25% decline.

As a result, the self-adjustable BTC blockchain had to intervene. Upon the network’s creation, Satoshi Nakamoto implemented a self-correcting mechanism embedded in the network that either increases or decreases depending on the number of active miners.

This feature occurs on every 2,016 blocks (roughly two weeks), and, in situations like the aforementioned one, it makes it easier for miners to do their job and receive rewards.

A couple of weeks ago, the network readjusted itself to decrease the difficulty by a substantial margin, and it dropped even further hours ago. The metric is down by about 20% since its peak in May. Following the latest decline, the Bitcoin mining difficulty reached a five-month low, as Glassnode highlighted.