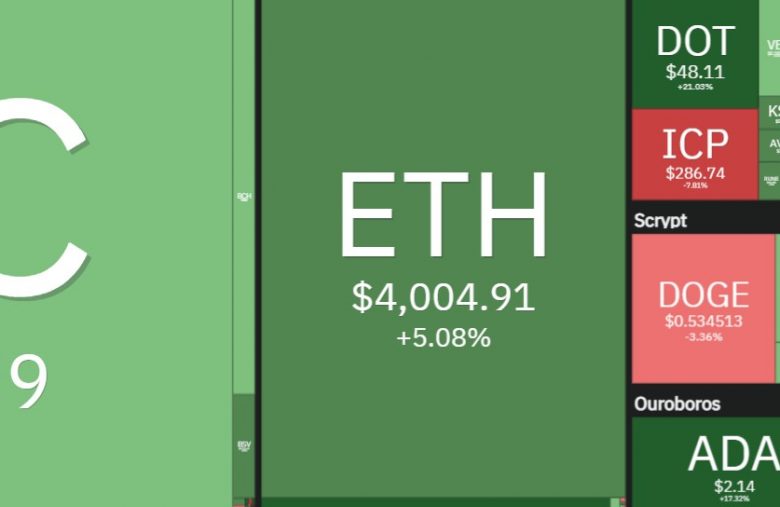 The Elon Musk-induced market crash continues to haunt bitcoin as the asset fails to decisively overcome $50,000. At the same time, the altcoins eat up its dominance with notable gains. Cardano is the top performer in the past few days, and the latest surge has driven ADA well above $2 for the first time.

Cardano Enters Top 5 After Breaking Above $2

The alternative coins took the market-wide crash better than their leader. Although almost all of them dumped initially, they have recovered the losses in just a few days.

Cardano is a prime example. Not only did ADA bounced off to its pre-crash level, but the cryptocurrency kept on climbing higher. It broke the previous ATH and set a new one at $1,86 a few days ago. However, it wasn’t satisfied with the results and continued north.

Consequently, ADA breached $2 for the first time hours ago and went towards its latest record at just shy of $2,20. With this increase, ADA reentered the top 5 largest cryptocurrencies by market cap and is close to overcoming DOGE as well.

The meme coin is also up by about 2% in a day. Ethereum, which dumped to $3,600 during the crash, has recovered some ground and currently stands above $4,000. Binance Coin, on the other hand, hasn’t reclaimed its round-numbered milestone and is below $600.

Ripple is up by 2%, while Polkadot has surged the most from the top ten after a 20% increase. As a result, DOT is close to $50.

Ultimately, the crypto market cap has remained above $2.3 trillion.

Bitcoin was badly hurt after Elon Musk’s announcement that Tesla had stopped receiving BTC payments for its electric vehicles. In less than a day, the primary cryptocurrency fell from $58,000 to a 2-month low beneath $47,000.

Since then, BTC has reclaimed some ground and even breached $50,000 and $51,000 a few times. However, each attempt was short-lived, and the asset fell back beneath the coveted $50,000 line.
In the past 24 hours, bitcoin still struggled there and, as of writing these lines, is below it once again.

The high-flying altcoins continue to reduce BTC’s market dominance. The metric comparing bitcoin’s market capitalization to the rest of the crypto assets is down below 40% for the first time in nearly three years. Just for reference, it was above 70% four months ago.