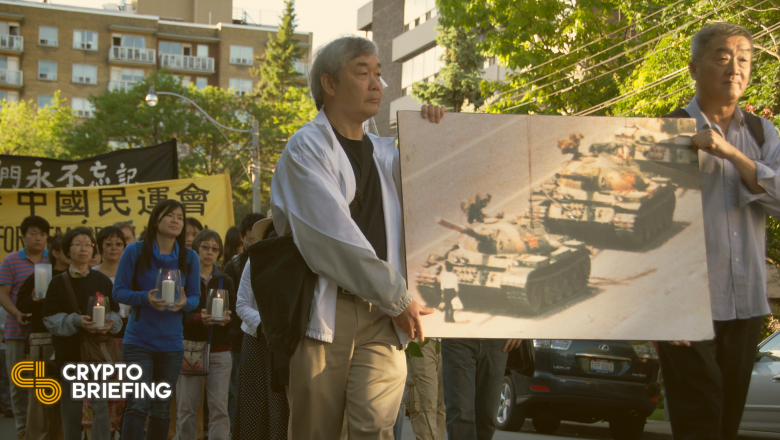 A series of projects on the Binance Smart Chain inspired by violent incidents in Chinese and American history are testing the platform’s decentralization limits.

An anonymous developer has released a game called “Tanks of Tiananmen” on Binance Smart Chain (BSC) to test decentralization on the platform and the Chinese authorities.

Welp someone deployed a Tiananmen Square Tank contract to $BSC and all of @cz_binance’s validators are centralized in China. https://t.co/5C1Q5eGA8G

The game is based on a 1989 pro-democratic protest when a man stood in front of Chinese military tanks in Beijing’s Tiananmen Square. The act advocated reform, protested corruption, and demanded freedom of the press in China.

During the event, over one million protestors gathered in Beijing’s Tiananmen Square. Many died in a massacre when the state eventually sent in tanks and armed soldiers. While officials state that 300 were killed, recent figures suggest that as many as 10,000 people died in the protest, run over by tanks and shot by advancing infantry.

The image of the unidentified “Tank Man” standing in front of a line of tanks became iconic throughout the world.

But due to state controls in China, the image is less widely known and more controversial. The events of Tiananmen Square are reportedly censored within China—as is free access to the famous image.

BSC Games Based on Slavery, Violence

Anyone can play the Tanks of Tiananmen game for free. There are 1 million TANK tokens available for free mining using the contract’s mint function.

Players take on the Chinese state’s role attempting to quell the protests, with each TANK token representing ammunition to be fired at civilians. During the game, players can choose sides—join the military or pro-democracy movement—using these tokens.

A character in the game called CZ, a reference to Binance CEO Changpeng Zhao, is shown on the protesters’ side.

Another game was launched on BSC allowing users to trade “slaves,” likely to attempt to stir up outrage and determine whether BSC is centralized enough to censor its own projects. Twitter has suspended the project team’s account.

Both games were met with immediate outrage due to their insensitive content. What’s more, the Tanks for Tiananmen game may even put real lives in danger. A rise in the game’s popularity could cause the Chinese government to pressure Binance into censoring the multiplayer game.

Despite the gravity of the move, others suggest that these games test Binance’s centralization.

“By definition, this experiment is supposed to be culturally insensitive. It wouldn’t work any other way,” said Bankless founder David Hoffman.

As CZ pointed out, this is not the first attack of its kind. Bitcoin’s blockchain was used to store links to images of illegal pornography in 2018, perhaps in an attempt to make running a Bitcoin node illegal.

Binance Smart Chain has quickly grown as an alternative for retail users restricted by the high fees on Ethereum. The blockchain’s native token has risen over 900% year-to-date and even grabbed the third spot in market capitalization at one point.

But fewer nodes on the Binance Chain have raised concerns around centralization on the blockchain. BSC only has 21 validators compared to more than 11,000 nodes on Ethereum.

The function of a node is to verify every transaction on the blockchain. Nodes have the power to update to new consensus rules and force the chain to follow them. The larger the number of nodes, the greater is the degree of decentralization because the majority will reject bad actors.

Due to BSC’s design, users and developers are reminded of EOS, which collapsed due to the unsustainably small number of validators.

Binance’s CEO persistently denies any control over the chain.

A few hater kids think they can bring down a blockchain with some scams/sensitive posts. We honestly can’t control it. But they are just promoting #BSC to their followers. 😆

Zhao has said that disgruntled members of the Bitcoin or Ethereum communities created the games to attack BSC.

Another idea is that there is a war between Sam Bankman-Fried of FTX exchange and CZ.

Crypto Briefing investigated the matter and noted that the creator of Tanks of Tiananmen received BNB from three addresses before creating the contract, including one address with links to DEGO Finance.

However, the identity of the project team remains unknown at this time.

It’s possible that BSC could censor the game by restricting the blockchain explorers. This move would suspend the listing of these contracts much like Etherscan.io does with projects that don’t adhere to its censorship rules.

Regardless of whether these games are taken down, the attacks are an ongoing reminder of projects’ constant challenges using blockchain technology.

Conflicts between immutability and ethics are always just around the corner.