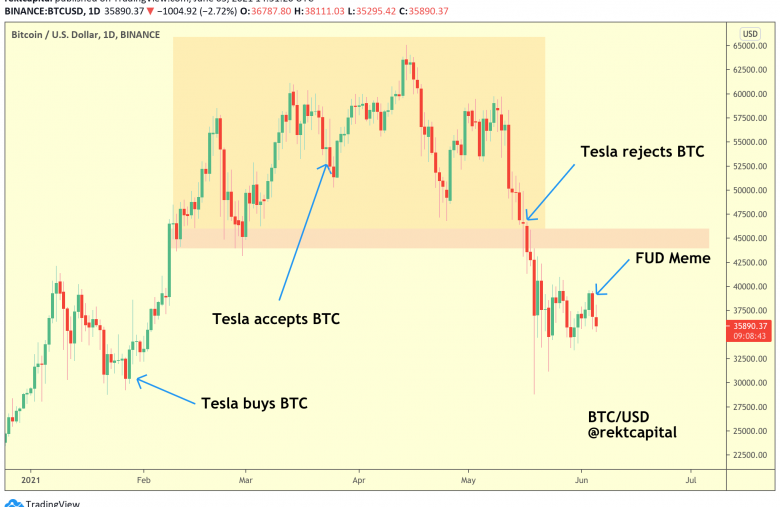 The total market capitalization has declined by 11% in a fall from $1.74 trillion to a low of $1.55 trillion during Tuesday morning’s Asian trading session.

The massive selloff has resulted in almost $200 billion being wiped out of digital assets and back into fiat. It is the lowest markets have fallen to since May 30.

The lowest total market cap has been during the current correction was on May 24, when it dropped to $1.46 trillion. Markets are still 50% higher than they were at the beginning of 2021, though.

Trader and technical analyst ‘Rekt Capital’ has blamed most of the market movements this year on Elon Musk and Tesla. There have been no further incendiary tweets from the tech billionaire over the past 24 hours to catalyze this current dump, however.

The latest round of FUD appears to have come from regulatory fears in the U.S. Recent ransomware attacks have put cryptocurrencies in the spotlight again as lawmakers and politicians repeatedly finger them for use in criminal activities.

Crypto YouTuber Lark Davis has pointed out that the death cross is now pretty much inevitable.

#bitcoin death cross closer by the day…
and with the current price action it is seeming increasingly likely! pic.twitter.com/Mk46VUtQCX

The BTC fear and greed index is at its lowest levels since the March 2020 market crash, hovering around 13 at the time of writing.

As usual, the rest of the market is taking more pain than Bitcoin at the moment. Ethereum has shed 10% on the day in a fall to $2,500 as it looks in danger of falling further to register lower lows.

Other altcoins dumping double digits at the time of writing include XRP, Polkadot, Uniswap, ICP, Bitcoin Cash, Litecoin, Chainlink, Solana, Polygon … and the list goes on.