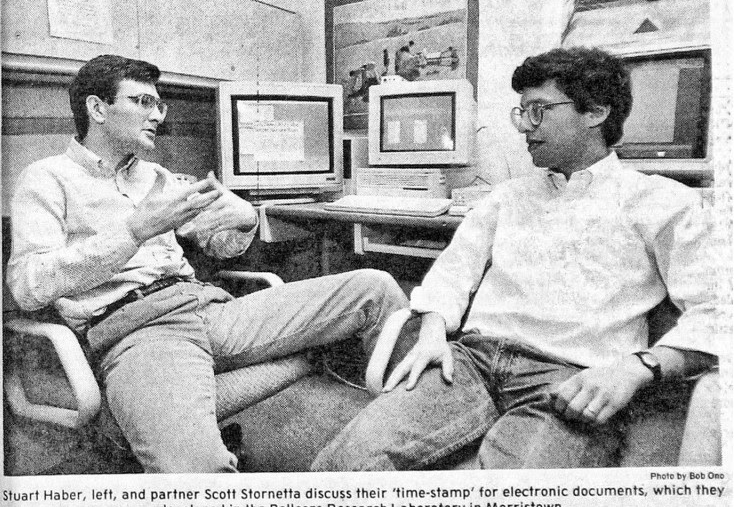 The celebration will be commemorated with an NFT release.

Two key figures in the earliest days of blockchain development are joining a team of industry leaders to celebrate the technology’s history and future. The release of an NFT collection will mark the occasion.

Blockchain Pioneers to Join Commemorative Celebration of the Space

The co-inventors of the early blockchain, Drs. Stuart Haber and W. Scott Stornetta, are joining with a team of industry-leading partners to commemorate the birth of blockchain technology—its past, present, and future. It’s a tribute to the journey and the community.

Today’s announcement marks the 30th anniversary of the public appearance of what might be called the “genesis block” of what is in fact the world’s oldest continuously running primitive blockchain, as explained here.

The celebration will conclude on January 03, 2022, the 13th anniversary of the Bitcoin genesis block.  Bitcoin’s design, as described in Satoshi Nakamoto’s white paper, Bitcoin: A Peer-to-Peer Electronic Cash System, relies on Haber and Stornetta’s mechanism for ensuring the integrity of all of its transactions.  In fact, three of Satoshi’s eight footnotes reference their technical papers.

The history of the blockchain will be celebrated with a collection of NFTs that both involve and honor the founders, innovators, and thought leaders of the blockchain community. The NFTs, demonstrating the range and diversity of the blockchain ecosystem, will be auctioned through a novel mechanism and will involve a number of innovative Layer 1 blockchains and their communities.

Jason Bailey, global thought leader in NFTs and founder of Artnome.com and ClubNFT, said, “Without the work of Stuart Haber and Scott Stornetta, there are no NFTs, no Bitcoin, and no blockchain. I’m thrilled that they are using this opportunity to create an NFT with the goal of unifying everyone within the blockchain ecosystem in a way that I believe only they can.”

“Kadena is thrilled and honored to participate in Immutable Record’s celebration of blockchain,” said Stuart Popejoy, the co-founder and CEO of the Kadena blockchain and smart contract platform. “Immutable Record’s NFT offering drives the space forward with a multi-protocol approach that also exploits many of Kadena’s unique advantages, such as institutional-quality provenance, entirely on-chain minting, and custom marketplaces.”

Haber and Stornetta concluded with “We are happy to join the celebration of the blockchain, and will be announcing the involvement of other leading Layer 1 blockchains and thought leaders. Stay tuned. The best is yet to come.”

Kadena is the industry’s only scalable layer-1 Proof of Work (PoW) blockchain, featuring Pact, the safest and easiest-to-use smart contract technology. Kadena’s platform provides the world the tools and environment to turn ideas and ambitions into reality, from DeFi applications to NFT marketplaces. As the only blockchain that can scale both speed and storage limitlessly, decentralized services on the Kadena platform allows users and builders to exceed current limitations in blockchain such as high gas fees and storage constraints, and even “mint marketplaces” where exchange and trading of tokens and NFTs can be customized endlessly. Founded by Stuart Popejoy and William Martino who created JP Morgan’s first blockchain and led the SEC’s Crypto Committee, Kadena aims to allow for true blockchain mass adoption.