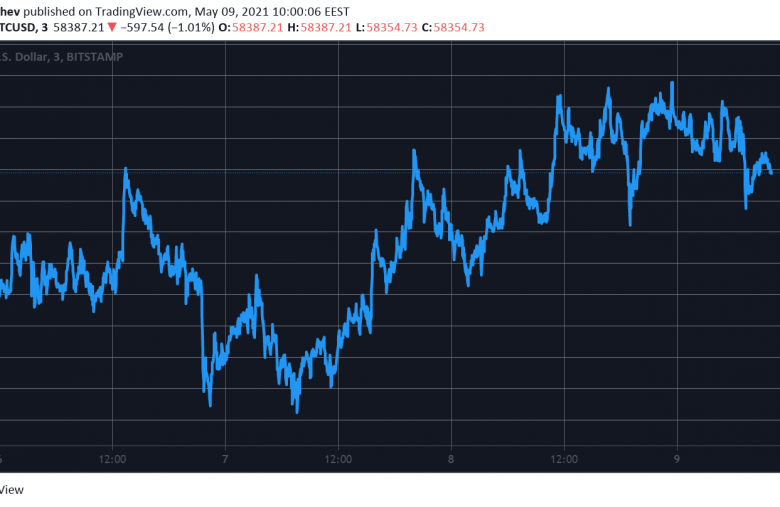 After a few days of sideways trading, bitcoin initiated an impressive leg up and even neared $60,000. Despite failing to overcome it, the asset has recovered some of its recently lost market dominance.

At the same time, DOGE has slumped after Musk’s SNL appearance, while ETH and ADA went for new all-time high records.

As reported just two days ago, the bears had control over the primary cryptocurrency and had pushed the price down to around $55,000. However, bitcoin managed to reverse the trajectory at that point and started to increase in value gradually.

BTC exceeded $58,000 yesterday and, after a brief retracement, continued even further. In the past 24 hours, bitcoin surged to an intraday high of $59,600. This became the cryptocurrency’s highest price tag since the mid-April market crash.

So far, though, BTC has failed to keep climbing to its old nemesis at $60,000 and has slid below $59,000. Nevertheless, being roughly 2% up in a day has helped bitcoin to reclaim some ground in terms of market capitalization.

The metric comparing BTC’s market cap with all altcoins has increased to about 45% after falling to 44% yesterday.

New Records for ETH and ADA

The altcoin market has experienced some wild fluctuations in recent weeks. Ethereum has been at the forefront of the gainers with massive price pumps.

The second-largest cryptocurrency broke above $3,000 less than a week ago, but it came $20 away from breaching $4,000 just minutes ago. Despite failing to surge above it yet, this is now ETH’s latest all-time high – $3,980.

Cardano also went for another record after the one registered earlier this week. This time, ADA went as high as $1.73 (on Bitstamp). Binance Coin is 3.5% up in the past 24 hours to $650.

In contrast, DOGE has lost the most value after the long-anticipated Elon Musk appearance on SNL. Dogecoin, which marked a new ATH yesterday, is now down by 25% to $0.55.

The most significant gainer from the top 100 is the new sensation – SHIBA INU. The token inspired by Dogecoin has entered the top 100 after an 850% weekly surge and is up by 160% in the past 24 hours alone.

The total crypto market cap also saw a record of its own after adding $60 billion in a day. The latest ATH came at $2.460 trillion.